‘Tanim-bala’ can be fun as game app 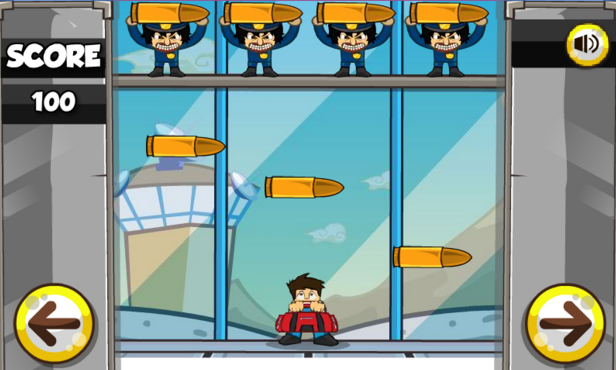 From a suspected airport scam to a national paranoia, to a mobile game app?

It may not be the outcome expected by victims of the so-called “tanim-bala” (bullet-planting) scheme, but projecting airport authorities as a bunch of extortionists in a game app may yet be the best revenge.

Created by independent game developer Argene Tanyong, “TanimBala,”  is a  simulation game that has an overseas Filipino worker—or a tourist, balikbayan (visiting Filipino) or any passenger checking in at the airport—trying to elude airport personnel who, in turn, are trying to drop a bullet in the passenger’s luggage.

In the game, airport personnel stand in a row while dropping large bullets in the luggage of a passenger standing a level below them. The figure representing the passenger is seen holding a piece of luggage with a worried, fearful look on its face. The player tries to move the  passenger sideways to avoid the bullet drop.

Once the player fails to steer the passenger clear of the bullet, the image of an airport officer blowing a whistle appears.  The officer appears once more, this time with a furrowed brow and teeth bared. Above its head are the words, “LOOK! A BULLET IN YOUR BAG! GIVE ME $1,000,” while the figure holds a bullet.

The player earns 100 points for every bullet the passenger manages to dodge.  But woe to the unlucky passenger who fails to elude the scheming airport official.

Do the rules sound familiar? But of course.  They describe the modus behind the controversial tanim-bala airport scheme.

Most victims of the scam deny owning the bullets found in their luggage, and describe the scheme as a ploy by corrupt airport personnel to extort money from them—$1,000 in most instances.

Under the Comprehensive Firearms and Ammunition Regulation Act,  the penalty for possessing a single bullet is a prison term ranging from six to 12 years.

Some lawmakers have called for amendments to the law, saying the possibility of arrest has become a source of temptation to airport personnel who dangle the penalty over erring passengers.

“Mag Tanim Bala ay di biro! (Planting bullets is no joke). Enjoy! ” Tanyong posted on his FB page where he announced his first game app, which can be downloaded on Google Play.

A former game website developer, the 31-year-old admitted his consternation over the tanim-bala scam that has spread paranoia among passengers at airports all over the country.

Even foreign organizations have advised their staff to take precautions when checking in their luggage at Philippine airports, specifically at Ninoy Aquino International Airport in Manila.

Tanyong said he created the game “partly out of frustration.”

“It’s also a stress buster,” he added of the mobile game app released on Wednesday under the brand name, “Kulit Games.”

Tanyong said he was planning to update the game “to soften the harsh label given to airport officials,” although personally, he added, the scheme would have not taken place without the connivance of these officials.