Searches on Internet for pregnancy products surge in China 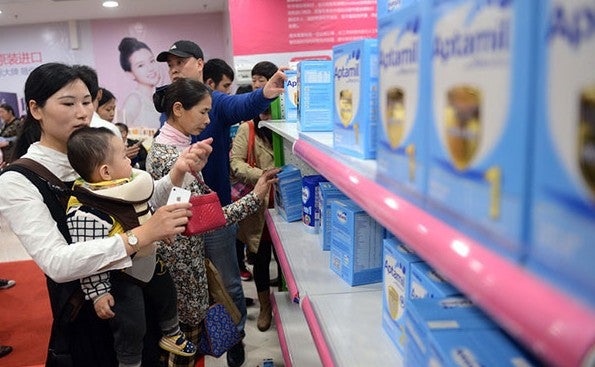 A Chinese mom shops for diapers while carrying her baby in a supermarket in Guangzhou, Guangdong province. File photo by China Daily/IC

The volume of Internet searches for products related to pregnancy preparation saw a dramatic increase after China announced its plan last week to allow all couples to have two children.

The search index for “preparing for pregnancy” increased in the past week by 148 percent year-on-year, according to Alibaba’s Taobao and Tmall, China’s two biggest online shopping platforms.

The index gauges popularity of products based on search volume, with average interest in a product assigned around 100 on the scale.

Before Oct 29, when China announced a plan to ease its family planning policy as part of the country’s 13th Five-Year Plan (2016-20) for development, the average daily index of searches for the term “preparing for pregnancy” generally stayed within a range of 50 to 150 on the index, but saw a surge starting late on Oct 29, peaking at 360 on Nov 2.

Customer search data compiled by the two platforms for the index indicated that people from smaller cities in China’s northern and central regions are the most eager to have a second child.

None of China’s first-tier cities, such as Beijing, Shanghai and Guangzhou, are among the top 20 cities that generate the highest number of “preparing for pregnancy” searches in the past week.

Pregnancy test kits, ovulation prediction kits and oral folic acid are the most popular products being searched for in the medicine and health category, according to statistics from Alibaba.

“Neither my husband nor I is a single child in our family. And we really hope to have two children as our parents did. But we didn’t meet the standard to have a second child until the new policy was announced a few days ago,” said Yuan Ku, 27, of Xuanwei, Yunnan province.

“The living cost is lower in small cities like where we are now living, and it’s affordable for us to have two children,” said Yuan, who has a 4-year-old daughter. “We are so glad and now are planning for having a second child.”

The new family planning policy, which awaits the approval of the top legislature before it can take effect, is boosting stock prices in China’s markets and overseas.

A large number of related companies saw their shares rise by the daily limit of 10 percent on Oct 30, the day after the plan was announced.