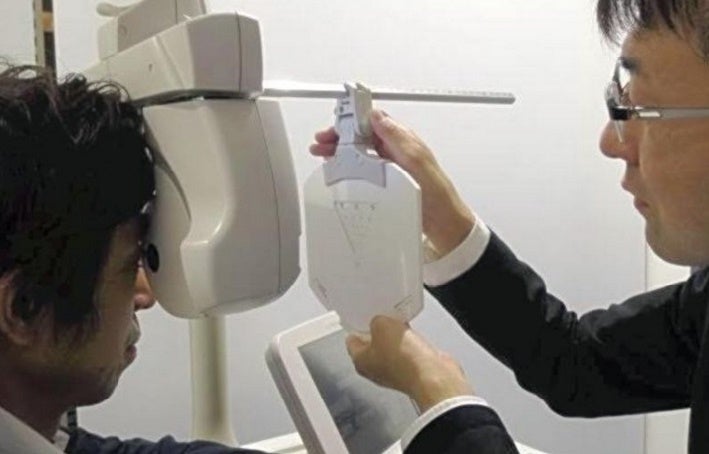 A customer takes an eye vision test at Meganesuper Co.’s DOCK Shirokanedai main store in Minato Ward, Tokyo. The chain has been conducting near vision tests for all customers since three years ago. Photo by The Yomiuri Shimbun

JAPAN — More and more people in their 20s and 30s are reporting vision trouble with symptoms similar to presbyopia, an eye condition involving difficulty focusing on nearby objects that naturally comes with age. Likely resulting from the proliferation of gadgets like smartphones, the symptoms are being dubbed “smartphone-induced presbyopia” — a modern ailment that underscores the need to refrain from excessive eye strain.

“Whenever I glance down at my watch or check a route map on the train, the letters are blurry and hard to read,” said a 29-year-old man who works at a trading company in Tokyo. He said the symptoms mainly appear in the evening, adding that their duration increases toward the weekend.

On top of using a computer at work, he’s completely absorbed in checking e-mails and gathering information on his smartphone when visiting clients. The man can’t put his smartphone down, even after work.

Trouble focusing on nearby objects sounds like presbyopia. Are other young people out there suffering from similar symptoms?

Misaki Ishioka, director of the Misaki Eye Clinic in Tokyo’s Shibuya Ward, said there are “definitely” a growing number of them.

“It’s not a medical term, but so-called smartphone-induced presbyopia is a result of excessive strain on the eyes,” Ishioka said.

Until two or three years ago, the clinic had two or three patients a month in their 20s or 30s with issues resembling onset symptoms of presbyopia — like “difficulty seeing nearby objects” and “on some days being unable to see something in a spot that is visible on other days.”

The condition is now showing up in 10-20 patients a month. Their vision is not exceptionally abnormal, but the ailment’s characteristic feature is difficulty in smoothly adjusting focus.

Smartphone-induced presbyopia is medically referred to as “adjustment tension.” Adjusting visual focus becomes impossible because of muscles stiffening from constantly staring at nearby objects.

The symptoms are typically temporary and not true presbyopia, but in serious cases the troubled vision could become permanent.

“Similar symptoms occur with personal computer use, but it’s more common with smartphones since you’re staring at letters up-close on a small screen.”

Tokyo-based Gankyo Publishing Co., which publishes an eyeglasses industry journal, asked 10,000 people who wear glasses every day about their vision. Young people ranging from their late-teens to the age of 34 who complained of presbyopia symptoms surged from 0.5 percent in 2012 to 6.7 percent in 2013.

Chain retailers of eye glasses are also calling for the prevention of presbyopia.

Vision Megane Inc. in Moriguchi, Osaka Prefecture, created a manual for employees this year that details stretching and diets that supposedly lead to the prevention of presbyopia. Some of the chain’s branches are using the manual to give advice to visitors suffering from presbyopia-like symptoms.

Based in Odawara, Kanagawa Prefecture, Meganesuper Co. opened a new branch in Tokyo this year that offers a relaxation room to relieve eye strain.

“The integration of smartphones and computers into our daily lives has presented a new, modern disease,” said Takatoshi Tano, a lecturer in the opthalmology department at the International University of Health and Welfare’s Atami Hospital. “I hope that people will refrain from using such devices for extended periods of time and take an interest in eye care.”