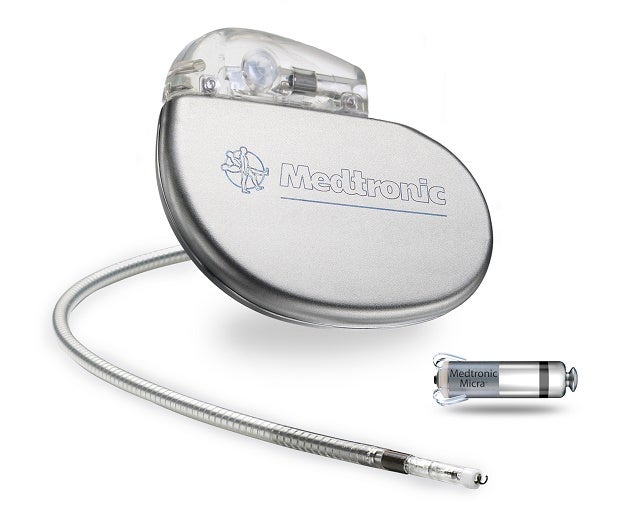 This image provided by Medtronic on Nov. 4, 2015, displays the Medtronic Micra pacemaker, right, next to a conventional pacemaker. AP

ORLANDO, Florida — Researchers are reporting encouraging results for a new generation of pacemakers — miniature, wireless ones that can be implanted through a leg vein without surgery.

In a study of 725 patients, one of these devices, made by Medtronic, was successfully implanted 99 percent of the time, with a low rate of complications compared to traditional pacemakers.

Leaders of the company-sponsored study discussed the research Monday at an American Heart Association conference in Orlando. Results also were published online by the New England Journal of Medicine.

Two months ago, the journal published a study of a similar device made by St. Jude Medical. Both of these mini pacemakers are already sold in Europe and the companies are seeking federal Food and Drug Administration approval to sell them in the US.

Roughly 200,000 people in the US each year get a pacemaker, a device to regulate their heartbeats. Pacemakers are implanted just under the skin in the chest, with wires called leads that go into the heart. The wires can break, wear out or become infected and are the main weakness of these pacing systems.

The mini pacemaker is the size of a large pill and can be placed without surgery, through a tube into a blood vessel in the groin, and attached to the right side of the heart.

“I think it is a breakthrough,” said Dr. Douglas Zipes, an Indiana University School of Medicine heart rhythm expert and past president of the American College of Cardiology. “Leads have been the Achilles’ heel of our implanted devices. To get rid of them will clearly benefit patients.”

That said, this is the first version of these devices, and they don’t do everything conventional pacemakers do. Only about one quarter of people who get pacemakers now would be candidates for the new mini ones. Future versions are expected to help more patients, and companies also are designing defibrillators that can be implanted without surgery as well.

Dr. Dwight Reynolds of the University of Oklahoma Health Sciences Center led the study on the new Medtronic mini pacemaker. Four percent of patients had major complications, including the device poking into the heart. Although the study did not test the device against a traditional pacemaker, previous studies involving nearly 2,700 patients suggest this is roughly half the rate of complications usually seen.

In the previous study on the St. Jude device, the implant success rate was 96 percent and the complication rate was 6.5 percent.

The two studies show leadless pacing “is feasible and relatively safe, at least in the short term,” Dr. Mark Link of Tufts Medical Center in Boston wrote in a commentary in the medical journal.

Many questions remain, though, including how to remove an infected or failed device, and whether the batteries really will last more than a decade as the companies project.

Dr. Jagmeet Singh, a Harvard Medical School professor and spokesman for the American College of Cardiology, called the results “really good” but echoed the concerns about long-term safety.

In Europe, “they’re markedly more expensive than a simple, conventional pacemaker,” said Singh, who has consulted for many device makers. A pacemaker without wires into the heart is an advance, but “there are downsides.”