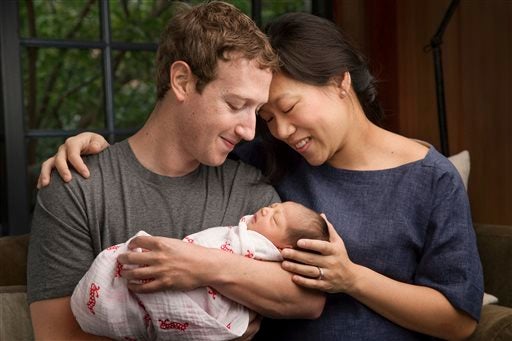 SAN FRANCISCO—Facebook cofounder Mark Zuckerberg announced on Tuesday he is a dad and pledged to give away his fortune to make the world a “better place” for baby daughter Maxima and others.

In a letter to Maxima posted on his Facebook page, Zuckerberg and wife Priscilla Chan said they were going to give away 99 percent of their company shares—estimated value $45 billion—during their lives in an effort to make a happy and healthy world.

READ: Zuckerberg is a dad, and he’s giving away $45 billion

“Max, we love you and feel a great responsibility to leave the world a better place for you and all children. We wish you a life filled with the same love, hope and joy you give us. We can’t wait to see what you bring to this world,” the letter said.

Zuckerberg will “gift or otherwise direct” nearly all his shares of Facebook stock, or the after-tax proceeds of sales of shares, to further a mission of “advancing human potential and promoting equality” by means of activities for the public good, the California-based social network said in a filing with the US Securities and Exchange Commission (SEC).

Zuckerberg “intends to retain his majority voting position in our stock for the foreseeable future,” Facebook said in the SEC filing.

Zuckerberg early on added his name to those who have taken a Giving Pledge to dedicate the majority of their wealth to philanthropy.

“We believe all lives have equal value and that includes the many more people who will live in future generations than live today,” Zuckerberg and Chan said in their letter to Max.

“Our society has an obligation to invest now to improve the lives of all those coming into this world, not just those already here.”

Zuckerberg in November said he and his wife were donating $20 million to help get high-speed Internet service to US classrooms.

The money is being given to a nonprofit group, Education Super Highway, to help with its mission, the Facebook chief executive said in a post on his page at the social network.

A month earlier, Zuckerberg and his doctor wife revealed plans to start a private school in a hardscrabble Silicon Valley town, mixing education with healthcare.

Zuckerberg voiced pride in his wife, Priscilla, for the plan to create “The Primary School” in the working-class city of East Palo Alto.

More than five years ago, Zuckerberg channeled $100 million to improve schools in the New Jersey city of Newark in an early foray into improving public education that got failing grades.

The announcement stunned the charity world. “It’s incredibly impressive and an enormous commitment that really eclipses anything that we’ve seen in terms of size,” said Phil Buchanan, president of the nonprofit Center for Effective Philanthropy.

By comparison, the Bill and Melinda Gates Foundation has an endowment of just over $41 billion, which includes wealth donated by the Microsoft founder and his friend, the businessman Warren Buffett.

The new initiative will be organized as a limited liability company, however, rather than as a nonprofit foundation.

“They want the most flexibility and they are going to use a wide variety of activities to achieve their mission,” Rachael Horwitz, a Facebook spokesperson, said via e-mail. “So in that way this is not a foundation nor is it entirely charitable.”

The notion of investing money in companies that tackle social issues isn’t new, but it has gained more currency among a younger generation of philanthropists, particularly in the tech world.

Zuckerberg plans to take two months’ paternity leave to be a dad.

“Studies show that when working parents take time to be with their newborns, outcomes are better for the children and families,” Zuckerberg said in an earlier post on his Facebook page.

Beginning with the new year, dads working full-time for Facebook anywhere in the world will have the option of taking four months’ paid leave.

All new dads working for Facebook outside the United States currently get a minimum of four weeks’ paternity leave, with more time offered in locations where required by local law, according to Facebook.

Same-sex partners who are not primary caregivers for babies get the same paid leave time as dads, according to the social network.

Maternity leave offered to Facebook employees around the world is already four months, and the benefit was available to both moms and dads in the United States.

Facebook also gives a $4,000 bonus for parents to help meet the needs of new babies. Reports from AFP and AP

Zuckerberg to take time off from Facebook to be a dad