Review: Ubisoft turns ‘Rainbow 6’ into 5-vs.-5 war on terror 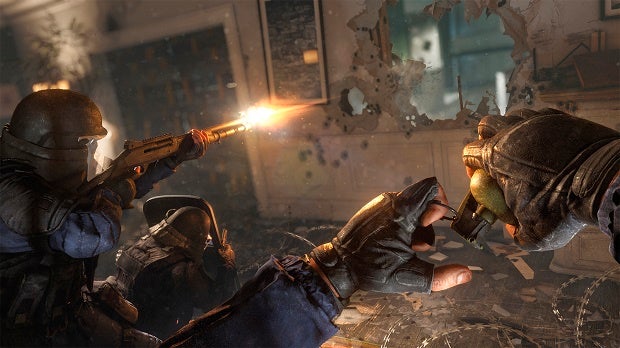 In this photo provided by Ubisoft, a commando squad battles a terrorist cell in the video game, “Tom Clancy’s Rainbow Six Siege.” The world of online video games can be a nightmare, an every-man-for-himself, kill-or-be-killed wasteland that brings out our most nihilistic impulses. But big publishers are hoping to change that with more games that force us to work together—particularly as they try to invent multiplayer competitions that will appeal to the ever-expanding audience for e-sports. Ubisoft via AP

The world of online video games can be a nightmare, an every-man-for-himself, kill-or-be-killed wasteland that brings out our most nihilistic impulses. But big publishers are hoping to change that with more games that force us to work together—particularly as they try to invent multiplayer competitions that will appeal to the ever-expanding audience for “e-sports.”

“Tom Clancy’s Rainbow Six Siege” (Ubisoft, for the Xbox One, PlayStation 4, PC, $59.95) is a five-vs.-five contest with some similarity to one of the most popular e-sports titles, Valve’s “Counter-Strike: Global Offensive.” It could be an audience hit—I found it almost as entertaining to watch as to play—but it need a bit more variety to stand out in the saturated multiplayer market.

You play as a member of a commando squad, attacking or defending against a second team of commandos. (Ubisoft says they’re both counter-terrorist units—which defies logic, but welcome to Clancy World.) In a typical scenario, the defenders have taken over a large building; the attackers need to bust in and “neutralize” (OK, kill) them. There are a few variables: The attackers may need to rescue a hostage or defuse a bomb, or the defenders may be trying to protect a human “asset” from assassination.

At the beginning of each mission, you and your teammates have 45 seconds to prepare. Defenders can erect obstacles and set traps, while attackers can send reconnaissance drones into the site. Then you get a few minutes of mayhem.

It sounds simple, but the large environments offer a wide variety of approaches to the task. As attackers, do you want to rappel up the walls and bust through the skylights, or sneak in through the garage and try to take your enemies by surprise? As defenders, do you want to hole up in one room or spread out and aggressively hunt down the invaders?

You can also choose to play as one of 20 different operatives, who bring different weapons, traps and skills (like healing or the ability to sense enemies through walls) to the mix. You can acquire those operatives by spending in-game currency, which you earn by completing matches or playing through the solo “situations.”

Even if you’re itching for multiplayer, it’s a good idea to run through the situations, which give you a solid grounding in the techniques you’ll need to win. There’s also a “terrorist hunt” mode where one to five operatives can fight off waves of computer-controlled bad guys. They aren’t as satisfying as the epic solo campaigns offered by previous “Rainbow Six” games, so if you’re a lone wolf, you’ll be disappointed.

Indeed, I’ve already heard from franchise fans who are angry that it has veered so dramatically into online multiplayer. You’ll get the most out of it if you can team up with four players you trust—which can be a tall order for even the most sociable gamer. Two-and-a-half stars out of four.

Child of Light: This new computer game is a sight to behold