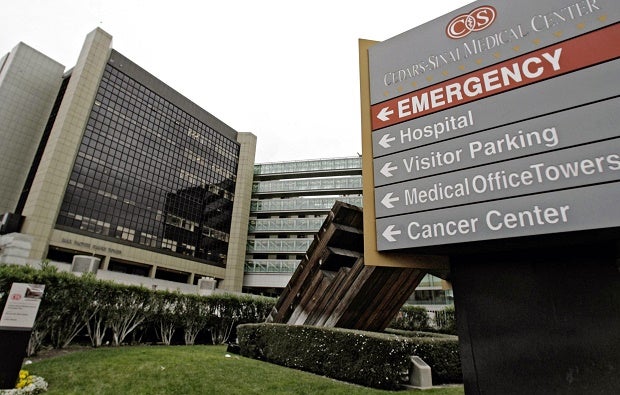 This Jan. 4, 2008 file photo shows Cedars-Sinai Medical Center in Los Angeles. Sudden cardiac arrest may not always be so sudden: New research shows a lot of people ignore potentially life-saving warning signs in the days and weeks before they collapse. AP FILE PHOTO

WASHINGTON — Sudden cardiac arrest may not always be so sudden: New research suggests a lot of people may ignore potentially life-saving warning signs hours, days, even a few weeks before they collapse.

Cardiac arrest claims about 350,000 US lives a year. It’s not a heart attack but worse: The heart abruptly stops beating, its electrical activity knocked out of rhythm. CPR can buy critical time, but so few patients survive that it’s hard been to tell if the longtime medical belief is correct that it’s a strike with little or no advance warning.

An unusual study that has closely tracked sudden cardiac arrest in Portland, Oregon, for over a decade got around that roadblock, using interviews with witnesses, family and friends after patients collapse and tracking down their medical records.

About half of middle-aged patients for whom symptom information could be found had experienced warning signs, mostly chest pain or shortness of breath, in the month before suffering a cardiac arrest, researchers reported Monday. The research offers the possibility of one day preventing some cardiac arrests if doctors could figure out how to find and treat the people most at risk.

“By the time the 911 call is made, it’s much too late for at least 90 percent of people,” said Dr. Sumeet Chugh of the Cedars-Sinai Heart Institute in Los Angeles, who led the study reported in Annals of Internal Medicine. “There’s this window of opportunity that we really didn’t know existed.”

Importantly, a fraction of patients considered their symptoms bad enough to call 911 before they collapsed, and they were most likely to survive.

That’s a reminder to the public not to ignore possible signs of heart trouble in hopes they’re just indigestion, said University of Pittsburgh emergency medicine specialist Dr. Clifton Callaway, who wasn’t involved in Monday’s study but praised it.

“Chest pain, shortness of breath — those are things you should come in the middle of the night to the emergency department and get checked out,” said Callaway, who chairs the American Heart Association’s emergency care committee. “We strongly recommend you don’t try to ride it out at home.”

Previous heart attacks, coronary heart disease, and certain inherited disorders that affect heartbeat all can increase the risk of sudden cardiac arrest. People known to be at high risk may receive an implanted defibrillator to shock the heart back into rhythm. But cardiac arrest is such a public health problem that the Institute of Medicine last summer urged a national campaign to teach CPR, so more bystanders know how to help.

Monday’s data from the Oregon Sudden Unexpected Death Study examined records for nearly 1,100 people ages 35 to 65 who suffered a cardiac arrest between 2002 and 2012.

For about a quarter of patients, researchers could find no information about whether they experienced symptoms — making it impossible to say just how common warning signs really are.

But of the remaining 839 patients, half had evidence of at least one symptom in the previous month, the study found. For most, the symptoms began within 24 hours of their collapse, although some came a week before and a few up to a month. Chest pain was most common in men, while women were more likely to experience shortness of breath. Other symptoms included fainting and heart palpitations.

Chugh had no way to determine symptom severity. But only 19 percent of patients called 911 about symptoms, mostly people with already diagnosed heart disease or who were having recurrent symptoms. Their survival was 32 percent, compared with 6 percent for other patients. Partly that’s because a fifth of those 911 callers had their cardiac arrest in the ambulance on the way to the hospital.

Stay tuned: The study is just the start of more research to better predict who is at highest risk for cardiac arrest, and determine how to target them without panicking people who’d do fine with general heart disease treatment, Chugh cautioned.