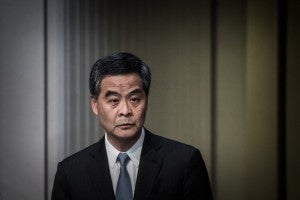 Hong Kong’s leader Leung Chun-ying said his Facebook page was hacked after reports that scantily-clad women had appeared on his friends list.

The embarrassing accusations came from tabloids Next Magazine and Apple Daily, which took screenshots of the list of people Leung follows on Facebook.

The shots showed young women with low-cut tops, with one reported to be a Japanese adult video actress.

Next Magazine said chief executive Leung had followed more than 10 of the women and that the list had been made public on December 24.

“The chief executive’s Facebook page was suspected to be hacked in the afternoon on December 24,” the statement issued Wednesday said.

“Some information and settings have been modified, some posts have been deleted, some ‘new friends’ have been added, and the profile picture of the chief executive’s Facebook page has been changed,” it said.

The hack had been reported to police, the statement added.

A police spokesman told AFP Thursday that the case was being investigated as one of “using a computer with criminal or dishonest intent”.

Leung’s Facebook friends list is no longer publicly available and the chief executive office’s statement about the alleged hack is the latest post on his page.

Unpopular Leung, who was caricatured as a vampire during last year’s mass pro-democracy rallies, was slammed by Next Magazine and Apple Daily, which are routinely critical of his government.

Next said Leung would “rather make friends with these large-breasted women instead of making a connection with Hong Kong residents”.

A Facebook comment from user Chai Chai Lai on Apple Daily’s account said: “You people should close your Facebook accounts. You don’t listen to the issues of Hong Kong and the voices of its residents, you’re of no use.”

It comes after Hong Kong lawmaker Albert Ho was photographed looking at pictures of bikini-clad models on his tablet computer during a budget speech in parliament last year.