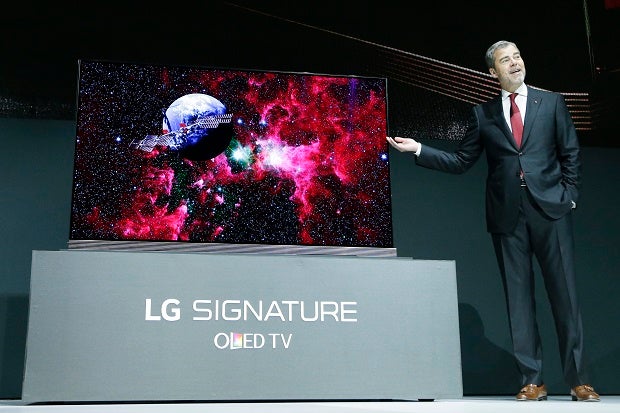 David VanderWaal, vice-president of marketing for LG Electronics USA, displays the new OLED 4K TV with HDR during a news conference preview for CES International on Tuesday, Jan. 5, 2016, in Las Vegas. LG unveiled the new TV, along with several other household electronics items at the news conference Tuesday. AP

LAS VEGAS, United States — A battle for the title of best new television opened Tuesday at the Consumer Electronics Show, with LG unveiling a new model no thicker than four stacked credit cards.

The South Korean consumer electronics colossus opened a packed day of press conferences at the annual tech extravaganza in Las Vegas with a line-up that included an OLED Signature panel touted as “quite literally, a picture on glass.”

“Our passion and commitment for OLED has never been stronger,” VanderWaal said.

“OLED TV is already recognized as the best TV ever.”

OLED displays have pixels that emit their own light, while pixels in LCD TVs are illuminated by backlights.

LCD televisions remain “the king of screens” with sizes trending up, according to the Consumer Technology Association, the trade group behind CES.

One in every five televisions sold this year is expected to be 50 inches or more, measured diagonally, and feature ultra high-definition 4K resolution.

LG was among the TV makers here introducing new models that will come with a freshly minted Ultra-High Definition Premium Certification signaling that they meet standards freshly established by an alliance representing manufacturers, technology companies and studios creating content.

“The criteria established by this broad cross-section of the Ultra HD ecosystem enables the delivery of a revolutionary in-home experience,” UHD Alliance chair Hanno Basse said in a release.

“And, the Ultra HD Premium logo gives consumers a single, identifying mark to seek out so they can purchase with confidence.”

Analysts told AFP they expected adoption of 4K ultra-high definition televisions to pick up speed this year as prices get in reach of more consumers and the displays become marketplace norms.

“Dolby Vision creates a picture so lifelike you will forget you are looking at a TV screen,” Dolby Labs senior vice president Giles Baker said during the presentation.

Dolby Vision has been used in major films including box-office record-breaker “Star Wars: The Force Awakens,” according to Giles.

Later in the day, leading television maker Samsung unveiled a new line of ultra-high-definition LCD televisions capable of not only streaming games or shows from the Internet but able to serve as command centers for smart home devices, from locks and lights to thermostats and appliances.

“This year we are focused on bringing the television experience into the future,” Samsung Electronics America executive Dave Das said.

“The new SUHD TV is a giant leap forward in time.”

New models have software designed to better consolidate traditional and online content, and remote controls that automatically detect and command accessories with no set-up needed.

– Smart home hubs -The TVs will also act as command centers in smart homes by incorporating technology from Silicon Valley start-up SmartThings, which Samsung bought in 2014, allowing them to control devices synched to the platform.

“I think this is really a big step forward for opening up the market,” SmartThings founder and chief Alexander Hawkinson told AFP.

“You can have a smart home basically for free as a starting point; it is pretty amazing.”

SmartThings is based on open standards, letting tens of thousands of developers tailor applications to work with the platform.

“In 2016, we’re going beyond anything we’ve done before to offer a remarkable synergy of design, engineering and craftsmanship,” said Hyun Suk Kim.

Samsung also unveiled its first Ultra HD Blu-ray Player, along with partnerships with Hollywood studios to release films in the format.