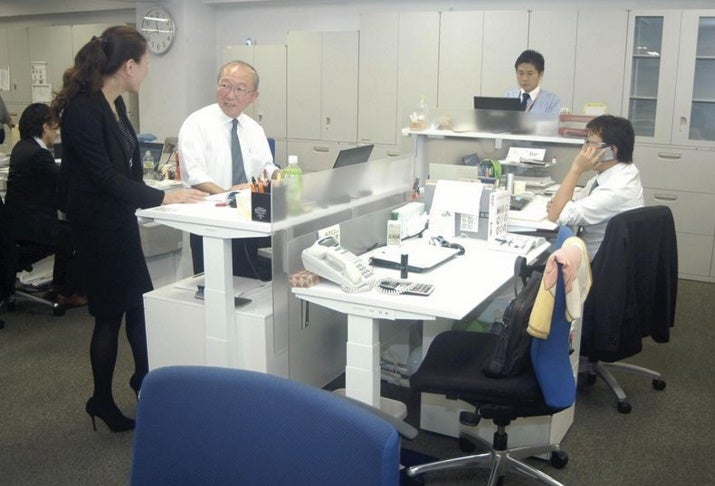 Employees of Seiwa Business Co. can choose to sit or stand while working. Research shows people can more easily talk and report to superiors if they are standing. JAPAN NEWS/YOMIURI SHIMBUN

TOKYO, JAPAN — A number of companies believe efficiency increases if their employees alternate between sitting down and standing up on the job, and in many cases workers do not even have to leave their desks to do both.

Seiwa Business Co., a Tokyo office design company, had the innovative idea of changing the heights of desks electrically so 111 employees of its sales and design departments can adjust them depending on whether they want to sit or stand. The company introduced the desks from March to November last year.

“If we keep sitting, it’s hard for people who suffer from back problems,” said Fumio Maruyama, an employee of the company in charge of introducing the desks. “Our work efficiency increased when we occasionally stood up. We could also move around more easily and have more opportunities to talk with colleagues.” Some employees say it relieves backaches, shoulder stiffness and swelling of the legs.

More and more workplaces have employees work while they occasionally stand. Behind this trend is research that proves that sitting for many hours has a negative effect on health.

Some specialists say people’s work efficiency increases if they alternately sit and stand at work. They also say working out effective time ratios for sitting and standing is a future research theme.

Rakuten, Inc. in Tokyo also replaced conventional work desks for 13,000 of its employees with desks with adjustable heights from June to September last year.

According to the company, the burden on the lumbar region of the spine while sitting is 1.4 times the stress when standing, and the harmful effect of looking down while seated for a long period is 1.8 times that when a person is standing up.

There seems to be some relationship between sitting for a long time and swelling of the legs. Researchers have found that the thickness of the calves increases over a period of two hours by 0.53 centimeters when remaining seated, 0.47 centimeters when standing and 0.28 centimeters when occasionally changing from a seated to standing position.

Prof. Koichiro Oka of Waseda University, a specialist in behavioral science, said more and more research is focused on the harmful effects on health of sitting for many hours at work and elsewhere.

Prof. Masahiro Akutsu of Tamagawa University, a specialist in human engineering, said: “When sitting on a chair, the thighs are pressed down, slowing the blood flow. This makes us feel sleepy and reduces work efficiency. When standing, the brain is more active. But standing for long time makes us tired, so the best thing is to sit and stand alternately.”

The results of an experiment show work entailing calculations is more efficiently carried out while alternately sitting and standing rather than remaining seated.

Some companies recommend that workers stand not merely in their work spaces.

In March, Fujikura Ltd., a major manufacturer of electric cable in Tokyo, began having some of its employees stand while working on a test basis. In October, the company set up a special area with tall tables so employees could exchange opinions while standing.

“When I couldn’t make any headway at an initial meeting with my colleagues in another room, we gathered [around the table] and were able to have a better discussion. Our thoughts became less muddled and we reached an agreement,” said a male employee in his late 40s.

The design of this space was undertaken by Itoki Corp., an Osaka office supply company. The company suggests the introduction of what it calls “workcise,” a work style that includes occasional light exercise.

“Japanese people used to sit on tatami mats in daily life. Therefore, it seems our risk of remaining seated for many hours can’t be simply compared to the risk Western people face,” Akutsu said. “The frequency of alternately sitting and standing differs depending on the type of work a person does, such as clerical work and coming up with new designs. Further research is needed on this subject.”

TOPICS: Chair, Company, Japan, Job, office, sedentary, sedentary lifestyle, sit, sit down, sitting down, stand, stand up, standing up, Work
Read Next
Gadget tells how heart-pounding movie thriller is
EDITORS' PICK
Current dominant strain of COVID-19 more infectious than original—study
Smart releases Hyun Bin’s second TVC
EuroMillions Superdraw: A lottery draw unlike any other is coming to the Philippines
‘Justice will be done,’ Duterte assures as he vowed probe on Jolo incident to bare ‘truth’
Water remains our saving grace right now
DOLE: Return of OFWs’ remains from Saudi to be ‘delayed,’ deadline moved to ‘early next week’
MOST READ
Locsin warns of ‘severest response’ if China’s army drills in SCS ‘spill over’ to PH domain
BREAKING: Duterte signs anti-terror bill into law
Duterte tells military: No other president looked at you the way I did
Vico: Cleanup of bidding process saved Pasig gov’t P415M
Don't miss out on the latest news and information.