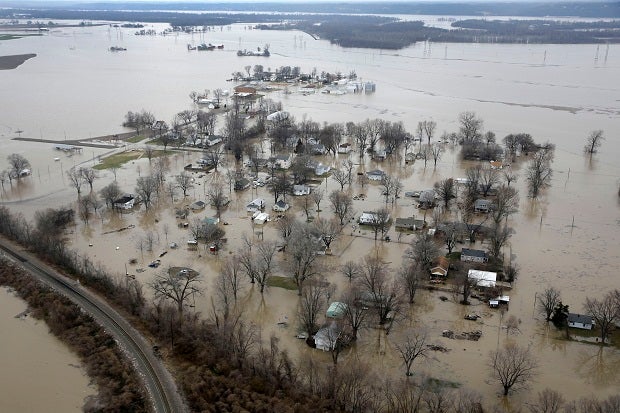 PARIS, France—Man-made climate change significantly enhanced the risk of the severe winter storms that ravaged southern England two years ago, according to a study released Monday.

Global warming amplified the likelihood of the “once-in-a-century” heavy flooding—responsible for some 600 million euros ($650 million) in insured losses during the winter of 2013/2014—by more than 40 percent, researchers reported.

“We found that extreme rainfall, as seen in January 2014, is more likely to occur in a changing climate,” said Nathalie Shaller, lead author and a scientist at Oxford University.

The study, published in the peer-reviewed journal Nature Climate Change, is part of a growing body of scientific literature seeking to connect the dots between long-term warming and extreme weather events.

It is a difficult case to establish.

The main reason is that climate trends are measured in decades or longer, making it very hard—when trying to tease out cause and effect—to separate natural weather variability from human-induced warming.

In the new study, two-thirds of the additional risk of major catastrophe could be traced to an increase in the water-holding capacity of the atmosphere, and one third to more days with winds coming across the Atlantic from the west, the study concluded.

“This study highlights the fact that we need a better understanding of not just how and where climate change is warming the atmosphere, but also how it is changing patterns of wind and rain, in order to best prepare for extreme rainfall and floods.”

Unlike previous attempts to link climate change with specific extreme weather events, Shaller and colleagues traced the connections “all the way from the changes in the atmosphere to the impacts on the ground,” she told AFP by phone.

Starting with an analysis of circulation in the atmosphere, they also looked at the additional risk of rainfall, as well as swollen river flows.

The final step, she said, was calculating flood potential in the Thames River Basin, right down to “the number of properties at risk,” she said.

“To our knowledge, this is the first attempt to connect all these factors together.”

Scientists not involved in the study confirmed that it broke new ground.

“It is the first to perform an end-to-end estimate of climate change impacts for an extreme weather event,” said Ted Shepherd, a climate change expert at the University of Reading.

“This study highlights the fact that we need a better understanding of not just how and where climate change is warming the atmosphere, but also how it is changing patterns of wind and rain, in order to best prepare for extreme rainfall and floods.”