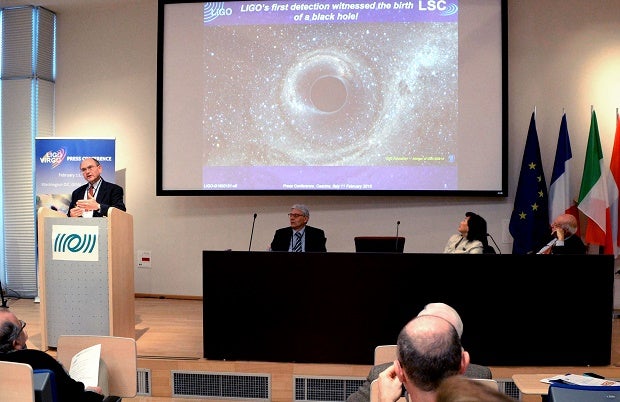 A moment of the press conference that was held Thursday, Feb. 11, 2016 at the “Virgo” plant, a 3-km long interferometer antenna for gravitational waves detection located at Cascina, near Pisa, Italy, which, working together with the American “Ligo”, allowed to detect the waves created by the violent collisions of two black holes. Gravitational waves, first theorized by Albert Einstein in 1916 as part of his theory of general relativity, are extraordinarily faint ripples in space-time, the hard-to-fathom fourth dimension that combines time with the familiar up, down, left and right. AP

— Gravitational waves are extraordinarily faint ripples in the fabric of space of time, caused by cataclysmic events such as star collisions. Albert Einstein predicted them in 1916 as part of his general theory of relativity.

— A $1.1 billion set of instruments detected such a wave last September from a distant collision of two black holes, according to an international group of scientists.

— It’s being hailed as a historic achievement because it means astronomers will now be able to “hear” the universe in action. The evidence of gravitational waves is captured in audio form. The discovery announced Thursday consisted of a single, faint “chirp.”