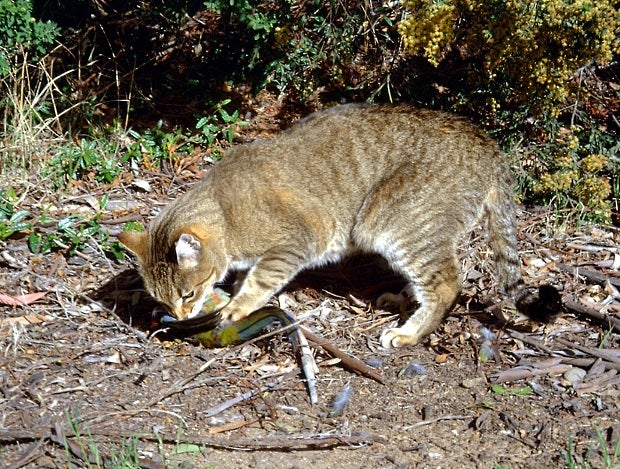 In this undated photo provided by the Department of the Environment, a feral cat catches and eats a crimson rosella bird at an unknown location in Australia. Researchers have found that much of the Australian species’ decline coincided with the introduction of two animals: the feral cat, which sailors brought to Australia on ships as a means of pest control, and red foxes, brought to the continent for hunting. AP

PARIS, France — Mammals with large brains tend to be smarter but they also face a greater chance today of going extinct, according to a study published Wednesday.

Scientists have long known that having oodles of grey matter comes at a certain cost. Supplying a big brain with blood, for example, requires a lot of energy.

READ: Sixth mass extinction is here—US study | For first time, PH tarsier is on most endangered list with half of world’s primates

But even if there isn’t a direct correlation between size and intelligence — humans don’t have the biggest brains in the animal kingdom, even in proportion to their body size — a bigger bundle of neurons is usually seen as a plus.

A professor at Stanford University, Eric Abelson, suspected there might be a link between larger brains and the risk of extinction.

To test his hypothesis, he examined museum samples from more than 1,650 animals from 160 different species in the Americas.

Abelson measured the skulls and body sizes of creatures as small as rodents and as big as buffalos, but did not include aquatic animals.

The next step was to check their status on the global endangered species list maintained by the International Union for Conservation of Nature (IUCN).

READ: Lion among 23,000 species threatened with extinction—group | Half of Africa’s vultures flying towards extinction—conservationists

The so-called Red List classification is broken down into half-a-dozen levels of extinction threat.

Abelson also examined a second data set of more than 600 species of animals across the globe.

To his surprise, he found a clear pattern: animals with larger brains were more at risk of going the way of the dodo and the dino.

In the Americas, the link was especially strong for mammals with a big brain relative to body size.

“This likely represents a case of ‘endangerment filtering’,” he explained in the study. “Species in North America have gone through a period where large-bodied species had suffered large population losses.”

These animals are now either extinct or protected with rebounding populations, and thus not — in either case — considered endangered, he added.

The findings come at a time when scientists believe Earth is entering a “mass extinction event,” only the sixth in the last half-billion years.

The most recent occurred 65 million years ago, and wiped out non-avian dinosaurs.

The current die-off is a result of changes set in motion by human activity and climate change, with life in the oceans particularly affected.

According to the IUCN, coral reefs — home to over a quarter of all marine species — could disappear by 2050. About 41 percent of amphibians and 26 of mammal species are currently facing the prosect of disappearing entirely.

Abelson said further research into the correlation between brain and body size could give scientists new tools to predict extinction rates.