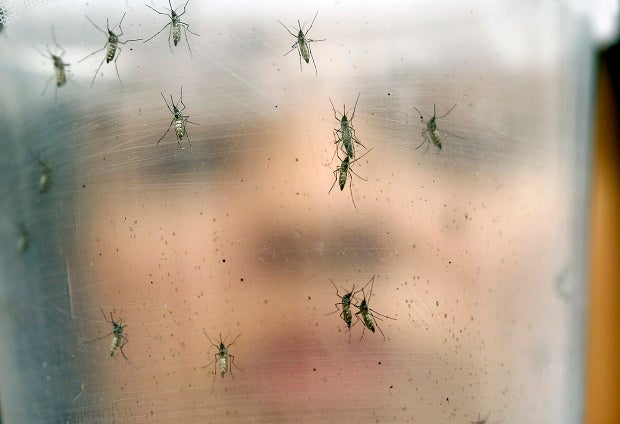 A researcher holds a container with female Aedes aegypti mosquitoes at the Biomedical Sciences Institute in the Sao Paulo’s University, in Sao Paulo, Brazil, Monday, Jan. 18, 2016. The Aedes aegypti is a vector for transmitting the Zika virus. The Brazilian government announced it will direct funds to a biomedical research center to help develop a vaccine against the Zika virus linked to brain damage in babies. AP

SEIBERSDORF, Austria—The atmosphere inside the laboratory on the outskirts of Vienna is literally buzzing with armies of male mosquitoes locked up inside net-covered boxes. Their sole mission in life: Stop females from breeding.

Experts from around the globe have been working strenuously in the IAEA’s tightly secured research facility in Seibersdorf, 30 kilometers south of the Austrian capital, to perfect something called the sterile insect technique, or SIT.

The clue’s in the name: Male mosquitoes have their private parts zapped with a radioactive source before being released into nature to mate with wild females, which, as a result, will lay infertile eggs.

The aim is to gradually reduce, if not suppress, their population.

The method has already proven successful in eradicating several pests, including the tsetse fly in Zanzibar and the fruit fly in most of northern Mexico.

The recent Zika outbreak in Latin America and the Caribbean is now spurring governments to find ways of containing the epidemic.

Several, such as worst-hit Brazil, are considering using SIT, which is most effective coupled with other methods including insecticide-spraying and removing breeding sites.

The stench in the hot lab is overpowering, prompting several of the visiting journalists to cover their noses.

In a large foyer, several trays on a table contain either wriggling larvae or hard-shelled pupae—“the stage when the mosquitoes get irradiated,” Vreysen explains.

Another room has a row of shelves stacked with whirring cages. Small signs reveal their occupants’ country of origin: Brazil, Indonesia, Thailand.

There is a brief moment of panic when one manages to break free and circles wildly around the narrow space.

The escape is short-lived, however, as the lone daredevil meets a scientist’s expertly swung electric fly swatter.

“Sometimes this happens. There are so many of them here,” shrugs entomologist Rosemary Lees who works on the SIT team.

In any case, a bite from a Zika-carrying mosquito would be primarily dangerous for pregnant women.

While it causes only mild flu-like symptoms in most people, the virus is strongly suspected of sparking a recent surge in the number of children born with microcephaly—abnormally small heads and brains—to infected mothers.

“The male feeds on flowers and nectar,” says Lees.

Right on cue, a lab assistant behind her starts to fill a sausage-shaped membrane with a thick, dark red liquid.

“We use blood from pigs or cows,” he is quick to point out, before gingerly placing the bag on top of a cage.

Almost instantly, swarms of the parasitical insects shoot up and, piercing the membrane with their tube-shaped mouths, start to frantically suckle away.

Countries may be itching to wipe out the bloodthirsty creatures, but several obstacles remain.

One key challenge is how to separate the sexes before irradiation.

There’s also the size issue: The ratio of lab-reared to wild mosquitoes needs to be at least 20 or even 10 to 1 for SIT make inroads into the host population.

Plus a sterilized male’s mating strength can quickly wane, says Vreysen: “Because we are rearing these insects at high density … this has in many cases a quality-reducing impact.” Last but not least, SIT entails building industrial-scale rearing facilities—an expensive undertaking.

Pilot studies in Mauritius and Sudan have proven SIT’s effectiveness in small villages.

“By upscaling (the program), you could maybe do trials in big cities in a couple of years from now,” Vreysen says.

IAEA member states affected by Zika will discuss using SIT at a meeting in Brazil next week.

But Vreysen warns there is no quick fix: “This is not like the World Food Programme: There is an outbreak of hunger in a country, they come in and dump food. We develop long-term, sustainable technologies.”

Research begins into possibility of a vaccine for Zika virus