Facebook’s Zuckerberg ‘sympathetic’ with Apple’s fight with US authorities 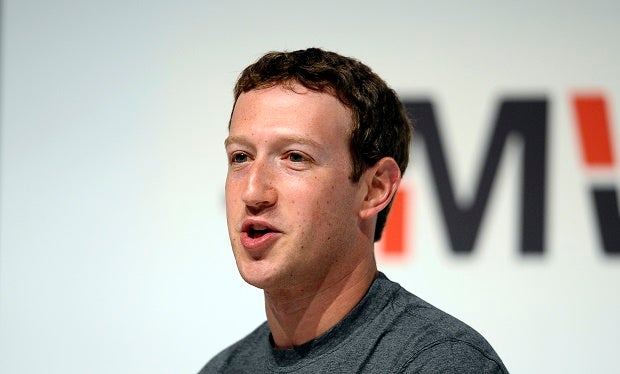 BARCELONA, Spain—Facebook’s Mark Zuckerberg said Monday he was “sympathetic” with Apple’s chief executive Tim Cook in his stand-off with the US government over breaking into the iPhone of a mass shooter.

“I don’t think that requiring back doors to encryption is either going to be an effective thing to increase security or is really the right thing to do. We are pretty sympathetic to Tim and Apple,” Facebook’s chief executive told delegates at the world’s biggest mobile congress in Barcelona.

“At the same time we feel we have a really big responsibility running this big networking community to help prevent terrorism and different types of attacks.

“If we have opportunities to basically work with the government to make sure there are not terrorist attacks, obviously we are going to take those opportunities,” he added during an address at Mobile World Congress.

The controversy emerged earlier this month when Apple refused to help the FBI break into an iPhone belonging Syed Farook, who along with his wife went on a deadly shooting rampage, killing 14 people in California’s San Bernardino in December.

Apple claims that cooperating with the probe would undermine privacy and security for its devices, while the US government counters it is a one-time request that will aid an important investigation.

Until now, Zuckerberg—who has been at pains to plug privacy features on the social networking site in recent years—has not spoken publicly about the spat although last week, Facebook issued a statement in support of Apple.

READ: Majority of Americans back FBI in battle with Apple

In the statement, it pledged to continue “to fight aggressively against requirements for companies to weaken the security of their systems,” saying such demands “would create a chilling precedent.”

Apple has vowed to fight a judge’s order that it should create an operating system that would allow the FBI to force entry into the iPhone.

Last week, Apple’s Cook also warned that complying with the order would set a dangerous precedent and open the door for governments and even criminals to access sensitive data in the future.

“Facebook and other large tech firms are global, and one of the things that they are concerned with is that when they make policy in the US, that policy is cited by other regimes, including non-democratic ones,” Avi Greengart of Current Analysis research firm told AFP.

“There is also the real fear that once you ensure that encryption can be broken, it will be broken, because the tools for doing so will inevitably leak out—and that imperils security for personal information, business information, and transactions.”

Other major firms at the Barcelona congress have also sided with the iPhone maker.

Richard Yu, consumer devices chief for Chinese electronics giant Huawei, said Sunday that privacy was “the most important thing to the consumer.”

“We should really protect the consumer’s privacy and security. Personally, I support… Tim Cook’s idea,” Bloomberg quoted him as saying.

Facebook was long accused of brushing aside users’ privacy concerns, and although Zuckerberg has strived to win back trust with a flurry of features, the social network is still in the eye of the storm.

Earlier this month, it was given three months by France’s CNIL privacy watchdog to stop storing data on people who do not have an account with the social network.

The decision comes after Facebook lost a similar fight with Belgium’s privacy watchdog in November when a court ordered it to stop storing personal data from non-users.

On a regional level, the European Union’s 28 privacy watchdogs have been coordinating probes into possible violations of EU law by Facebook’s policy for handling personal photos and data.

TOPICS: Apple, Attacks, Facebook, IT, Lifestyle, Science, US
Read Next
Majority of Americans back FBI in battle with Apple
EDITORS' PICK
Harnessing technology for quality education
After Olympic win, PAF promotes Hidilyn Diaz to staff sergeant
Nesthy Petecio assured of Olympics bronze, ousts Colombian foe
Trillanes: No Magdalo support if Robredo gives way to Lacson
Tips for a cheerful life
Connect to PH’s fastest network with new Signature Plan Lite at only P599 per month
MOST READ
Philippines to bring home multiple Olympic medals for first time since 1932
Isko for 2022? Manila mayor takes a swipe at Duterte in live broadcast
Lacson bares talks with Robredo ahead of 2022 polls
Why is Taiwan not called Taiwan at the Olympics?
Don't miss out on the latest news and information.