Some victims in terror attack support efforts to hack iPhone 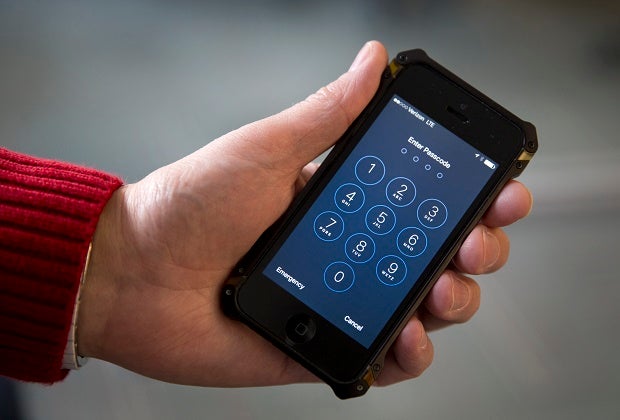 This Feb. 17, 2016 file photo shows an iPhone in Washington. The FBI says that compelling Apple to help unlock an extremist’s iPhone should be safe and straightforward, but security experts say it’s not so simple. Federal officials say that security-bypassing software they’ve asked Apple to produce is limited in scope and poses no risk to the privacy of other iPhone users. But experts say there’s still a risk that software could leak and be used to target just about anyone. AP

WASHINGTON — Some family members of victims and survivors of the San Bernardino mass shooting will file court papers in support of a judge’s order that Apple Inc. help the FBI hack into a locked iPhone as part of the terrorism investigation, a lawyer and others said Monday.

A Los Angeles attorney, Stephen Larson, said he represents at least several families of victims and other employees affected by the attack. He said the US Attorney in the case, Eileen Decker, sought his help.

Larson said he will file a brief supporting the Justice Department before March 3.

The victims “have questions that go simply beyond the criminal investigation … in terms of why this happened, how this happened, why they were targeted, is there anything about them on the iPhone — things that are more of a personal victim” view, Larson said.

The appeal from victim family members gives the Justice Department additional support in a case that has sparked a national debate over digital privacy rights and national security interests. Magistrate Judge Sheri Pym ordered Apple last week to assist investigators by creating specialized software that would let the FBI rapidly test random passcode combinations to try to unlock the iPhone and view data stored on it.

The county-issued iPhone 5C was used by Syed Farook, who with his wife, Tashfeen Malik, killed 14 people at an office Christmas party in December before they died in a gun battle with police in San Bernardino. The government said they had been at least partly inspired by the Islamic State.

The couple physically destroyed two personal phones so completely that the FBI has been unable to recover information from them.

Robert Velasco, whose 27-year-old daughter Yvette Velasco was killed in the shooting, told The Associated Press that he didn’t have to think long before agreeing to have his name added to the legal filing in support of the FBI.

“It is important to me to have my name in there,” Velasco said. “I lost my daughter in this and I want the court to see that I am seeking justice for my daughter.”

Velasco said the phone could reveal other terror plots or that other people were involved in planning the San Bernardino attack.

“The only way to find out is to open up that phone and get in there,” he said. “A lot of the families of the victims, we’re kind of angry and confused as to why Apple is refusing to do this.”

White House spokesman Josh Earnest said Monday that the FBI’s request is “quite limited in scope” and called it “an effective way for the FBI to follow their regular procedure as they conduct this independent investigation, but also stay true to the kinds of principles that the President has discussed publicly about the need for robust encryption methods.”

Earnest said the sides needed to hash things out in court and questioned whether Congress — as Apple and others have suggested — would be an effective medium for solving issues evoked by the court order.

Farook had worked as a county health inspector. Larson said the government has a strong case because of Farook’s diminished privacy interests as a “dead, murderous terrorist” and because the phone was owned by his employer, the county government. “You’re weighing that against the interest of enforcement in an investigation and the victims and their interest in obtaining this knowledge,” he said.

Apple Inc. CEO Tim Cook acknowledged in a letter to employees earlier Monday that that “it does not feel right” to refuse to help the FBI, but that doing so would threaten data security for millions by creating essentially a master key that could later be duplicated and used against other phones.

“We have no tolerance or sympathy for terrorists,” Cook wrote in an email. “When they commit unspeakable acts like the tragic attacks in San Bernardino, we work to help the authorities pursue justice for the victims.”

Hours earlier, FBI director James Comey said in an online post that Apple owes it to the San Bernardino victims to cooperate and the FBI “can’t look the survivors in the eye, or ourselves in the mirror, if we don’t follow this lead.”

Facebook CEO Mark Zuckerberg on Monday expressed his support of Apple, while in Barcelona, Spain to speak at the Mobile World Congress, saying he believes in helping the government in its fight against terrorists but that encryption is important.

“I don’t think that back doors into encryption is going to increase security or is in the direction the world is going,” he said.

Apple’s supporters planned to protest the FBI’s demands on Tuesday evening outside Apple’s stories in about 50 cities in the US, Britain, Germany and Hong Kong.

A Pew Research Center survey found that 51 percent of Americans said Apple should unlock the iPhone, while 38 percent said Apple should not to ensure the security of user information. The remainder gave no opinion. The telephone survey was conducted Feb. 18 through Feb. 21 among 1,002 adults.