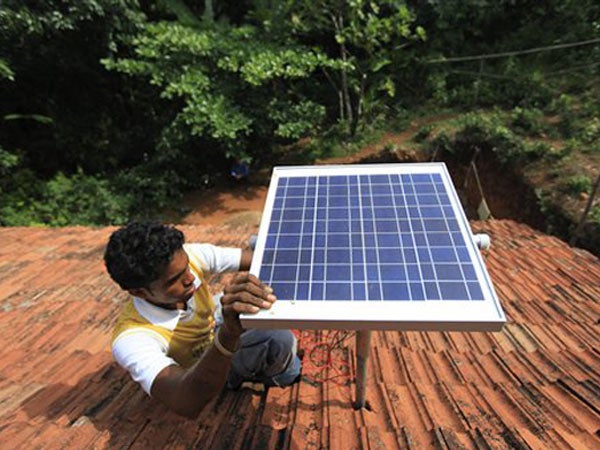 LET THERE BE LIGHT. A solar panel is installed on the rooftop of a house in this Associated Press file photo. In Silay City, Citicore Power opened on Tuesday its first solar power plant.

Citicore Power opened its first solar power plant in Silay City, Negros Occidental on Tuesday, making it well on track to becoming eligible for incentives given to renewable energy developers.

Citicore Power is a sister company of construction giant Megawide.

“SSPI is optimistic it will be awarded the FIT,” Citicore Power head of corporate affairs Richard Tan said via e-mail. Those who want to operate under the second batch of solar power FIT rates (P8.69 per kilowatt-hour or kWh) must have completed their projects and opened their power stations by March 15, 2016. The rate for the first batch was P9.68 per kWh.

The 25-megawatt (MW) solar energy generating facility is expected to power 30,000 homes connected to the Visayas grid. The engineering and construction work for the project, which spans 43 hectares and includes more than 96,000 photovoltaic (PV) modules, was done by Megawide Construction Corp.

“This is a very significant milestone for us as we complete the first batch of Citicore’s projects, beginning with the Silay plant,” Citicore EVP Manolo Candelaria said separately.

The plant is expected to help avoid 18,000 metric tons of carbon emissions per year—equivalent to planting 800,000 trees over the life of the facility. Project funding was secured through Landbank of the Philippines.

Candelaria disclosed that Citicore Power is also launching other solar power projects in key areas of Visayas and Luzon. “We are also inaugurating a 20MW solar farm in Bataan by the end of February.”

Department of Energy data show that more than 1,000MW of solar power will soon come from Negros Occidental once all targeted projects in the area are commissioned. TVJ

Poe on Cayetano’s ‘sipsip’ remark: You can’t please everyone