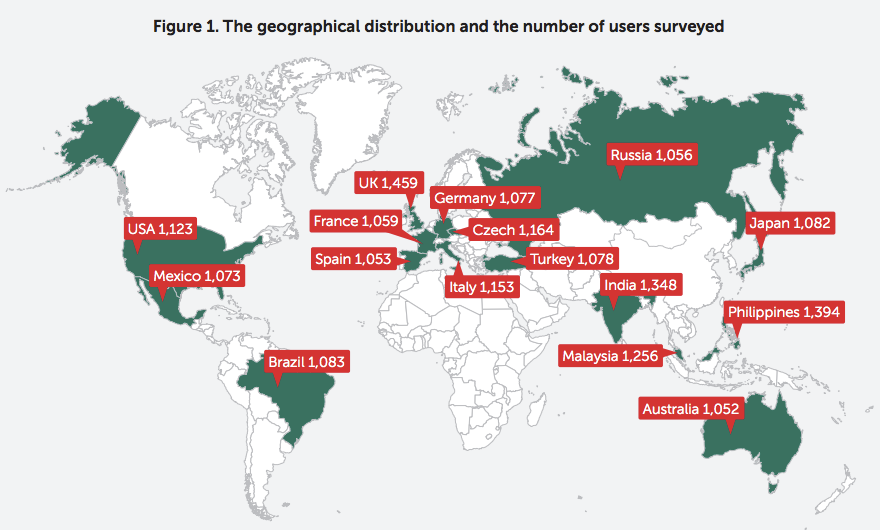 The global study of Kaspersky Lab had 18,000 respondents from 16 countries with 1,394 coming from the Philippines. Graphics from the Kaspersky Lab report.

A global study by an international cybersecurity company on the habits of social media users has found that a large number are easy targets for hackers or cybercriminals.

“Not everyone knows the rules of safe online behavior,” Kaspersky Lab said in its report following a survey of more than 18,000 users from 16 countries. Philippines had the second highest number of respondents with 1,394.

“Our inability to recognize a potential Internet threat may lead to consequences that are as unpleasant as in the real world – the loss of money or valuable things, an interference with privacy, etc.” the report said.

Findings of the Kaspersky study show that many people’s social media habits are vulnerable to exploitation by cybercriminals. Graphics from the Kaspersky Lab report.

“Social networking sites are where we leave information about ourselves — our digital shadow. Once they have cracked a user’s page, cybercriminals get the chance to publish advertisements on his behalf, send malicious links to his friends, or use his personal information for their own purposes,” the Kaspersky report said.

“Each user of a social networking site should be ready for this and follow some simple rules: for example, not add to friends all in a row, not disclose too much personal information and not to click on all links received from his friends,” it said.

Among the other main findings in the study was that only 24 percent of users could tell the difference between original websites and fake ones. Fake websites are used by cybercriminals to steal user information such as usernames and passwords or financial information.

It also found that 34 percent of users would not hesitate to download an attachment from an email even if it was an executable file (.exe format) which is most likely a malicious file sent by a potential hacker.

Findings of the Kaspersky study show that there are still social media users who share information publicly. Graphics from the Kaspersky report.