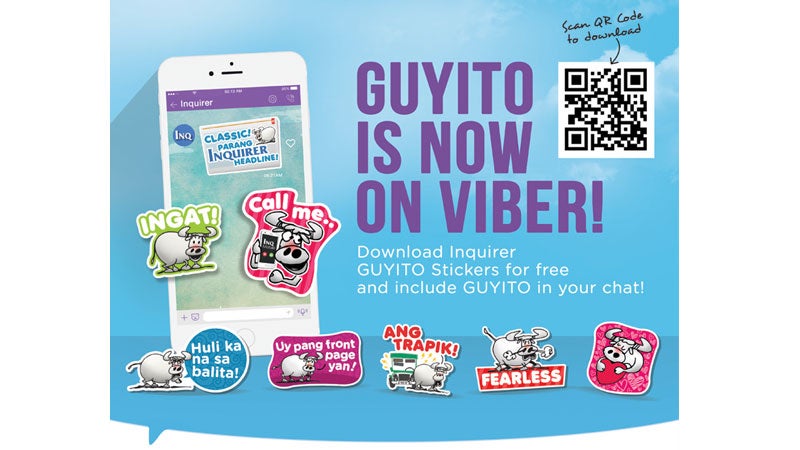 IF YOU can’t find the words or if words are not enough when sending instant messages, let Guyito do the talking.

The Inquirer Group launched this week its own stickers on the mobile chat application Viber, its most colorful and expressive set yet, featuring the frank yet charming mascot Guyito and its unique brand of wit.

Guyito, known for its playfully snide thought balloons that serve as the constant companion of the Inquirer’s cartoon stories, is making its presence felt in the conversations of the Inquirer’s 117,000 Viber followers through colorful stickers that could come in handy to spice up text exchanges on the popular chat platform.

“Guyito is a figure of the Inquirer. When writers couldn’t say something, Guyito is there to say the stuff that are a little too embarrassing or scary to say. But since it’s a figure, you can’t put it in jail,” said Brigette Tan Villarin, Inquirer Mobile operations chief.

“When people chat with their friends and family and they use the sticker, it’s like we (the Inquirer brand) are always part of their conversation,” she said.

“We made sure that all the stickers are used in normal conversation. It’s not just for branding. It’s something that people may use any time of the year. For instance, it’s not specific just for the elections,” Villarin said, adding that the sticker designs were finalized in one month.

So the sticker that says “After 30 Years” commemorates the Inquirer’s 30th anniversary along with the Edsa People Power Revolution, but could also be a witty and exaggerated message to a friend who is running late to a meet-up.

The “ThINQ Again” sticker, which carries the Inquirer’s 2016 election tag line, could serve as a piece of advice to a friend about to make an important decision.

The “Uy pang-front page ’yan (That’s front page material)!” and “Classic! Pang-Inquirer Headline (That could be an Inquirer headline)” could be your response to juicy gossip. “Huli ka na sa balita (You’ve been outscooped)” and “Online ka ba (Are you online)?” could be sent to that one group chat lurker who hardly checks the thread.

For messages that need no words, there are stickers featuring Guyito hugging a heart, one surrounded by question marks in a moment of incredulity and caught in bad weather, struggling to hold on to an umbrella.

And when you’re too shy to nag that friend for a lunch or dinner treat, there’s the very useful “Libre naman dyan! (How about a treat?)” sticker.

“Everyone in the Inquirer Group had a hand in the sticker project. Mobile editors provided witty expressions that went well with the images enhanced by Matt Reyes, our creative artist,” Villarin said, adding that Guyito, a Jess Abrera original, was made more colorful and cuter for the chat app. 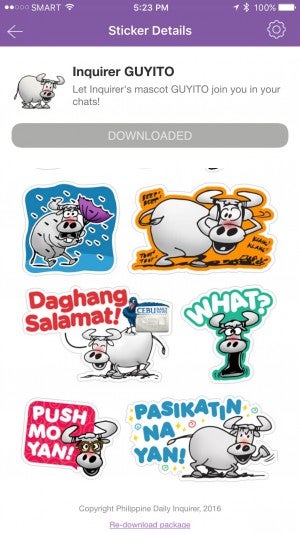 “Sandy Prieto-Romualdez, Inquirer president and CEO, wanted to have a sticker that pushes for change, and it was interpreted as “Push mo ’yan!” she said.

Through the sticker project, the Inquirer hopes to bring the brand closer to Viber users and convert them from simply reading news alerts to reading Inquirer stories in full.

Currently, Viber accounts for more than a fourth of the Inquirer’s 420,000 followers on various chat apps, receiving regular notifications to read “snackable content” on the Inquirer public chat.

Each user who downloads the sticker automatically subscribes to the Inquirer public chat, if they had yet to sign up.

“Mobile is the first touch-point for most who are on the go. The purpose of the alerts is really for them (Inquirer’s Viber followers) to also go beyond mobile. From the chat, they could move to the Inquirer mobile application and from there, if they want to read more, they can go online and read the newspaper,” Villarin said.

Of the total Inquirer followers on various chat applications, 60 percent read the Inquirer’s posts, while 3 percent go beyond the alerts and read full stories on Inquirer platforms.

“It’s very important because a lot of people are into mobile. [They get] snackable content—it’s very quick, one glance and you get the message, because what we send on Viber are alerts. But if you want to read more, you shift to another Inquirer platform,” she said.

The Guyito stickers for Viber is the fourth pack the Inquirer launched for chat applications, having earlier released two sticker sets for Line and Kakao Talk.