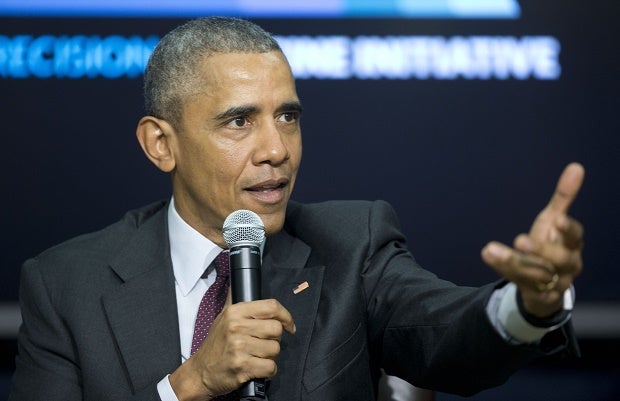 President Barack Obama speaks during a panel discussion as part of the White House Precision Medicine Initiative (PMI), in the South Court Auditorium in the Eisenhower Executive Office Building on the White House complex in Washington, Thursday, Feb. 25, 2016. AP Photo

WASHINGTON, United States—The United States on Thursday announced a massive new medical study that will enroll one million people as part of a White House-led initiative to improve treatment of diseases and cancers.

President Barack Obama first unveiled the Precision Medicine Initiative (PMI) in January 2015, and funded it with $215 million to “accelerate a new era of medicine that delivers the right treatment at the right time to the right person, taking into account individuals’ health history, genes, environments, and lifestyles,” said a White House statement detailing the launch of a series of new programs.

They include the launch of the first phase of the Precision Medicine Initiative Cohort, which will eventually include one million or more US volunteers.

National Institutes of Health Director Francis Collins described the project as a “landmark longitudinal research study… to expand our understanding of ways we can improve health and treat disease.”

He said the goal is to enroll 79,000 cohort participants by the end of 2016. It may take three to four years to reach full enrollment, and the participants will be followed for multiple years.

The PMI Cohort program is being funded by the NIH and led by Vanderbilt University in collaboration with Verily, formerly Google Life Sciences.

Precision medicine aims to transform the treatment of diseases ranging from cancer to mental illness by incorporating molecular testing, genetic analysis and environmental factors into the treatment of individual patients.

“This will be a participant-engaged, data-driven research effort at the intersection of human biology, behavior, genetics, environment, data science, and computation aimed at developing more effective ways to improve health and treat disease,” said the White House statement.

It added that “more than 40 private-sector organizations are making commitments that will accelerate precision medicine.”

11.4 million have signed up for Obamacare coverage