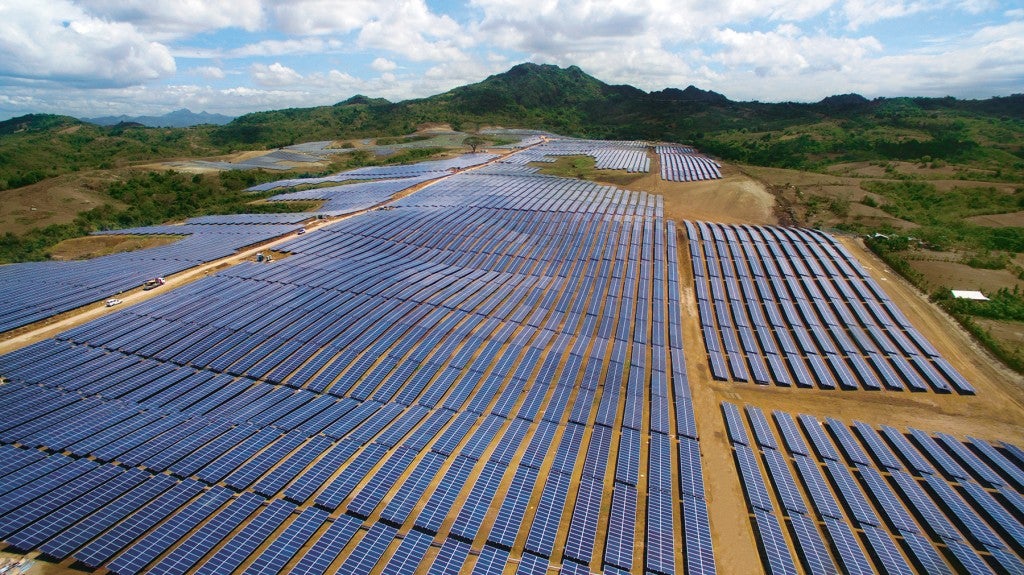 BIGGEST SOLAR FARM Rather than harvest rice and corn, this 160-hectare farm in Calatagan, Batangas province, the largest solar facility in the country, generates heat from the sun, providing power to the western part of Batangas. CONTRIBUTED PHOTO

A sea of metalloid panels as far as the eye can see gleams in the sun in a 160-hectare farm traversing a rolling terrain near the foot of Mount San Piro in Batangas province.

Instead of growing crops like rice or corn, this vast farm harvests heat from the sun and generates enough energy to power the whole of western Batangas.

This is the 63.3-megawatt Calatagan Solar Farm at the convergence of Calatagan, Lian and Balayan towns, the largest solar facility completed in the Philippines to date.

Located 10 minutes from Calatagan’s popular beach resorts, such a glistening man-made structure with a unique undulating landscape—not yet common in this part of the world—attracts curiosity. Passersby often stop to take selfies with the farm for a background.

Comprising more than 200,000 panels built by 2,500 people, this solar farm was completed ahead of other projects backed by conglomerates and foreign investors racing to secure feed-in-tariff allowance.

The farm started generating power weeks before the March 15 government deadline to build capacity to obtain fiscal incentives under the country’s feed-in-tariff regime.

With over three decades of operation, Calatagan Solar Farm is expected to offset over 1 million tons of carbon dioxide, equivalent to planting over 5 million trees. Now that this farm has been switched on, it is expected to continue to employ at least 100 people and boost the economy of Batangas.

“Being on a peninsula (Calatagan), facing the South China Sea, the solar farm enjoys a steady breeze, the highest levels of sunlight in Southern Tagalog and is seldom hit by typhoons,” Leviste said.

Solar Philippines said this latest project was just the beginning of its plan to transform the power industry.

“Whereas others see solar as just a part of their portfolio, we believe it will one day supply the largest share of the energy mix,” Leviste said.

“Costs continue to improve, and solar will soon become cheaper than coal. As the only local company organized to develop and build solar farms from end-to-end, we are in a unique position to realize that potential.”

While there are other solar power projects in the pipeline, the Calatagan project—apart from being the biggest completed so far—marks the first time a local company has developed, financed and constructed this type of renewable energy facility.

The majority of the cost was funded by Philippine Business Bank (PBB), the banking arm of the Zest-O group led by business magnate Alfredo Yao, Leviste said. Other banks that supported the project were Banco de Oro, China Bank and Bank of Commerce.

“We owe this success to banks like PBB, who support SMEs (small and medium enterprises) in emerging industries as partners more than just as financial institutions,” Leviste said. “We look forward to extend these partnerships into future projects.”

Leviste said he expected this solar farm to break even in eight years.

On top of malls

When Solar Philippines began building solar power plants, it first built solar panels on top of shopping malls such as Central Mall Biñan, SM North Edsa and Robinsons Palawan. It still dreams of turning every vast rooftop in this country into a power plant.

However, building solar farms on idle tracts of land is now seen as a way to scale up operations and generate power at a lower cost.

“Whether the panels are installed on land or on a rooftop, the business model remains the same, except the terms of the off-take agreements can differ. In either case, we enter into a power supply agreement with a buyer (such as the building-owner), or sell power to the grid’s Wholesale Electricity Spot Market,” Leviste explained.

“The real difference is scale and with that comes lower costs. We plan to focus on solar farms as the best way to accelerate the deployment of solar in the Philippines, but we’ll also continue to develop rooftops, not least to spread awareness that the time for solar has arrived,” he said.

Solar Philippines will soon begin construction on its next projects in Mindanao and Luzon. It aims to complete 500 MW of capacity by 2017.

Including the Calatagan project, Solar Philippines has a total solar power capacity of 80 MW at present. Other projects in Mindanao (20 MW) and Luzon (50 MW) are seen to boost its capacity to 150 MW by midyear.

Leviste is confident his company could build more projects outside of the next round of solar feed-in-tariff, the allowance the government gives—and consumers pay for—as an incentive to renewable energy producers.

“We’re charging ahead at full speed on our next batch of projects, even without a next round of feed-in-tariff, because by making solar cost competitive, we can grow the market beyond subsidies and supply the entire demand of the Philippines,” Leviste said.

“The exciting thing is that the Philippines will be among the first places where solar will overtake fossil fuel, because existing rates are so uncompetitively high, allowing the Philippines to become a global leader in solar power and positioning it for when the numbers start to make sense in the rest of the world. That can only happen if companies like us are focused on making solar cost competitive for the long term, instead of just maximizing profits from subsidies in the short term,” he said.

For solar farms built on land, Solar Philippines’ strategy is to buy all the land occupied by its projects. This is because few landowners are willing to tie down their property for over 25 years, Leviste said.

“Land acquisition is one of the greatest challenges for solar projects in an archipelago where arable land is highly valued, and most other solar developers are unwilling to risk buying lands outright,” he explained.

“We consider our patience and willingness to make an up-front investment for land to be one of our competitive advantages, demonstrating our long-term commitment to bring solar to every province of the Philippines,” he added.

A son of environmental advocate Sen. Loren Legarda, Leviste shares the vision of SolarCity and Tesla Motors founder Elon Musk, who believes in a future where solar energy will replace the electricity grid we know today.

Leviste was about to finish his senior year at Yale University, where he was majoring in political science, when he heeded the call of entrepreneurship. He founded Solar Philippines in 2013, initially running the new enterprise from his bedroom. He has since assembled a 200-man team.

READ: A power plant on every roof

He was among the Filipinos who landed in Forbes Asia Magazine’s “30 Under 30” list of “inspiring young leaders in various fields covering consumer technology, enterprise technology, the arts, healthcare and science, media, social entrepreneurship, finance, industry and retail.” TVJ