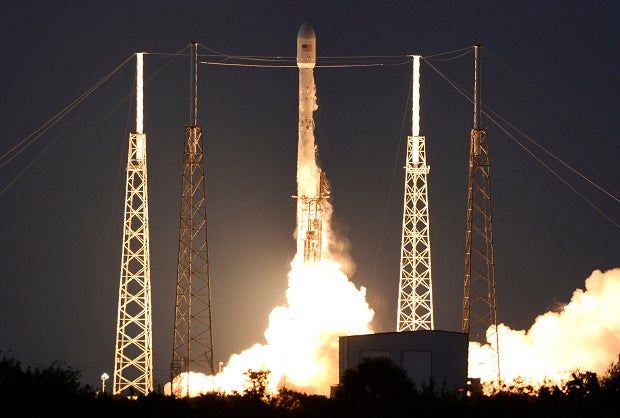 MIAMI, United States – SpaceX on Friday successfully launched a communications satellite to a distant orbit but failed, as expected, to land the first stage of its Falcon 9 rocket on an ocean platform.

The rocket launched from Cape Canaveral, Florida at 6:36 pm (2336 GMT), propelling the satellite, known as SES-9, built by Boeing for the Luxembourg-based company SES.

The satellite successfully reached its geostationary orbit more than 24,000 miles (40,000 kilometers) above the Earth, about 100 times as high as the International Space Station.

From there it will deliver broadband and television channels to southeast Asia.

“Thanks @SES_Satellites for riding on Falcon 9! Look forward to future missions.”

After the launch, SpaceX tried to land the first stage of its rocket on a platform floating in the Atlantic Ocean about 375 miles (600 kilometers) off the east coast of Florida.

The droneship, as it is called, is marked with a large “X” and the words, “Of Course I Still Love You.”

Grainy video footage showed a bright light approaching the droneship from the upper left, before the live feed cut out.

“Rocket landed hard on the droneship. Didn’t expect this one to work,” Musk wrote on Twitter.

“But next flight has a good chance.”

SpaceX had cautioned it did not expect a successful landing this time, but tried anyway as part of its broader attempt to perfect its technique of recycling rocket parts in order to make spaceflight cheaper and more sustainable.

The California-based company has managed to land upright on solid ground once–in December 2015–but several attempts at ocean touchdowns have failed.

“This landing attempt is going to be a really tough one,” said Lauren Lyons, mission integrator for SpaceX, ahead of the launch, noting that the rocket needed a lot of propellant to lift the satellite to space and might run short of fuel needed to control the landing on the way back.