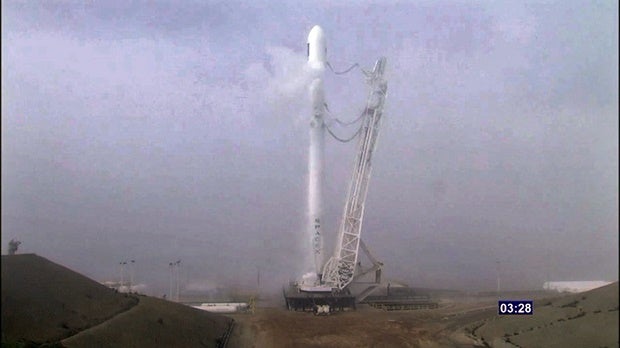 In an image providfed by NASA TV, Space-Xs Falcon 9 rocket with the Jason-3 satellite aboard is shown less than four minutes from launch at Vandenberg Air Force Base, Calif. Sunday, Jan. 17, 2016. NASA TV via AP FILE PHOTO

MIAMI, United States—California-based SpaceX is already warning that failure is likely in Wednesday’s attempt at landing its Falcon 9 rocket, following the launch of a European satellite into a distant orbit.

A 90-minute window for liftoff of the unmanned rocket opens on February 24 at 6:46 p.m. (2346 GMT) from Cape Canaveral, Florida, SpaceX said on its website. In case of bad weather, another opportunity arises Thursday around the same time.

The goal of the mission is to propel a Boeing-built SES-9 satellite—delivering television and high-speed broadband to the Asia-Pacific region—to a geostationary transfer orbit (GTO) far above the equator.

Then, SpaceX will try again to land the tall part of its rocket, known as the first stage, on a floating platform in the Atlantic Ocean.

“Following stage separation, the first stage of the Falcon 9 will attempt an experimental landing on the ‘Of Course I Still Love You’ droneship,” SpaceX said.

“Given this mission’s unique GTO profile, a successful landing is not expected.”

SpaceX successfully landed its Falcon 9 on solid ground last year, but numerous attempts at landing on barges in the Atlantic and Pacific have failed.

Headed by Internet entrepreneur Elon Musk, who also runs Tesla Motors, the company is working to hone the techniques of recycling rockets, instead of jettisoning their costly components after each launch.

The aim is to make launches more affordable and environmentally friendly.

The launch is commissioned by SES, a Luxembourg-based company that specializes in worldwide satellite communications.