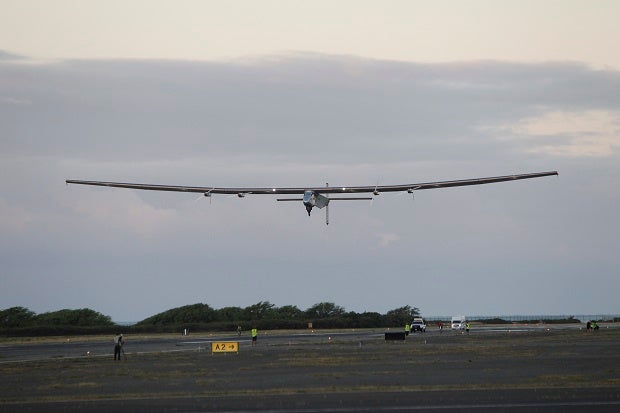 In this Thursday, April 21, 2016 file photo, the Solar Impulse 2 solar plane lifts off at the Kalaeloa Airport, in Kapolei, Hawaii. The solar plane on an around-the-world journey has reached the point of no return over the Pacific Ocean after departing Hawaii, and now it’s California or bust. The plane was cruising over the cold northern Pacific late Thursday at about 20,000 feet with a nearly-full battery as night descended, according to the website that’s documenting the journey of Solar Impulse 2. AP FILE PHOTO

OVER THE PACIFIC OCEAN — The pilot of a solar-powered plane on an around-the-world journey took a few minutes Friday to exchange pleasantries with the United Nations secretary general as he flew high above the Pacific Ocean en route to a stop in Northern California.

“I speak to you from the cockpit of Solar Impulse in the middle of the Pacific, flying only on solar power. No fuel,” pilot Bertrand Piccard told UN Secretary-General Ban Ki-moon during a brief conversation streamed live on his aircraft’s website.

Ban hailed Piccard’s pioneering spirit as “inspirational,” telling him he was making history.

Piccard responded that Ban, too, was making history by having just presided over the signing of a climate agreement supported by representatives of 175 nations.

“What you are doing today in New York, signing the Paris agreement, is more than protecting the environment, it is the launch of the clean technology revolution,” Piccard said.

After brief good wishes from an official of his native Switzerland, the pilot continued on his way. He passed the halfway point of the journey and said he expected to be in the San Francisco Bay area by Saturday evening.

He may arrive early. The project’s website said the Solar Impulse 2 picked up a strong tail wind in the late afternoon and was cruising at 150 kilometers, or about 93 mph.

Earlier, Piccard had watched in fascination from his plane as the sun, which is powering his aircraft’s batteries, rose over the ocean on Friday, which is also Earth Day. “Absolutely fantastic moment … That’s a sunrise I will remember all my life,” he said.

The trans-Pacific leg of his journey is the riskiest part of the plane’s global travels because of the lack of emergency landing sites.

After uncertainty about winds, the plane took off from Hawaii on Thursday morning and was on course to land in Mountain View, California, over the weekend. The crew that helped it take off was clearing out of its Hawaiian hangar and headed for the mainland for the weekend arrival.

At one point passengers on a Hawaiian Air jet caught a glimpse of the Solar Impulse 2 before the airliner sped past the slow-moving aircraft.

The Solar Impulse 2 landed in Hawaii in July and was forced to stay in the islands after the plane’s battery system sustained heat damage on its trip from Japan.

The aircraft started its around-the-world journey in March 2015 from Abu Dhabi, the capital of the United Arab Emirates, and made stops in Oman, Myanmar, China and Japan. It’s on the ninth leg of its circumnavigation.

Piccard, said the destination in the heart of Silicon Valley is fitting, as the plane will land “in the middle of the pioneering spirit.” Piccard’s co-pilot Andre Borschberg flew the leg from Japan to Hawaii.

The team was delayed in Asia, as well. When first attempting to fly from Nanjing, China, to Hawaii, the crew had to divert to Japan because of unfavorable weather and a damaged wing.

A month later, when weather conditions were right, the plane departed from Nagoya in central Japan for Hawaii.

The plane’s ideal flight speed is about 28 mph, though that can double during the day when the sun’s rays are strongest. The carbon-fiber aircraft weighs more than 5,000 pounds, or about as much as a midsize truck.

The wings of Solar Impulse 2, which stretch wider than those of a Boeing 747, are equipped with 17,000 solar cells that power propellers and charge batteries. The plane runs on stored energy at night.