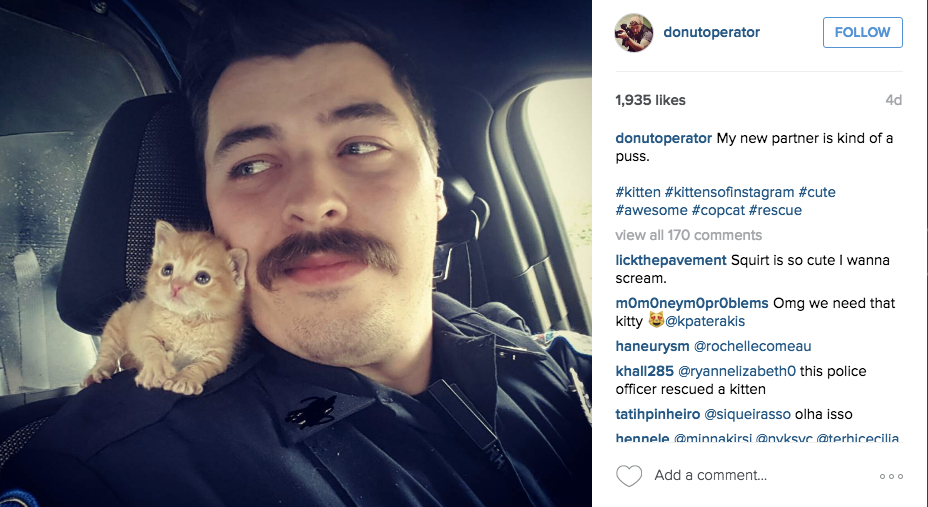 Instead of the adorable kitty, the spotlight gazed at her ‘knight in shining armor’.

Police officer Cody Garrett of Spartanburg, South Carolina, United States, took a charming selfie with an orange midget feline after he and his co-worker rescued her in a dumpsite. The classy photo, which was posted on social media site Instagram, managed to seize the attention of thousands.

The 28-year-old cop has been bombarded with marriage proposals since the selfie went viral.

Since the rescue, Garrett adopted the kitten, whom he named Squirt.

“It was raining outside pretty bad. We probably saved her life since there was a small flash flood in the area shortly afterwards,” Garret was quoted by Huffington Post in a report. He also said that Squirt is the tiniest kitten he encountered in his life.

Prior to Squirt, Garett had rescued a cat whom he named Toothless and is now a beloved pet who recently gave birth to a litter of kittens. He also has two puppies whom he rescued from his patrol trips.

Despite an alarming number of romantic proposals since the selfie became quaintly viral, the policeman loyally clings to his long-time girlfriend.

Garrett has one touching reminder to people, “Police officers aren’t the enemy,” he explained. “We have families, we like rescuing animals and playing video games. We’re not just out doing the crazy stuff people see on the news.” Gianna Francesca Catolico