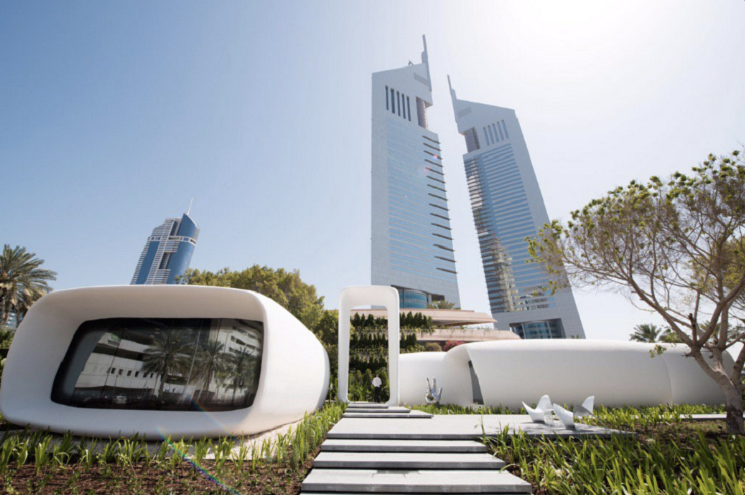 The cutting-edge and luxurious city of Dubai, United Arab Emirates (UAE), has made waves around the globe with the commencement of the Kingdom’s–and the world’s–first fully operational 3D printed building.

Shaikh Mohammad Bin Rashid Al Maktoum, Vice-President and Prime Minister of the UAE and Ruler of Dubai, welcomed the “Office of the Future”, the city’s 3D building, in a groundbreaking ceremony on Monday.

In a report by Emirati news site Gulf News, Shiekh Mohammed proudly spoke to the public, “We implement what we plan, and we pursue actions, not theories. The rapidly changing world requires us to accelerate our pace of development for history does not recognize our plans but our achievements.”

The exquisite and superb building located in the Emirates Towers premises will be the temporary home of the Dubai Future Foundation.

The “Office of the Future” is one of the blueprints under the prosperous Dubai 3D Printing Strategy, an initiative to elevate and harness the status of the Kingdom as a ‘leading global center’ of 3D printing by 2030.
The 250-square meter building was constructed using a special mixture of cement and building materials manufactured in the UAE and the United States. The features of the building were devised for efficient energy consumption.

The window shades serve as an umbrella against direct sunlight while the building’s arc shape was patterned for safety and stability purposes.

“Office of the Future” was printed using a 3D printer measuring 20 feet high, 120 feet long, and 40 feet wide, and is coupled with an attached automated robotic arm for ease of printing. Gianna Francesca Catolico