Jury sides with Google in battle over Android software 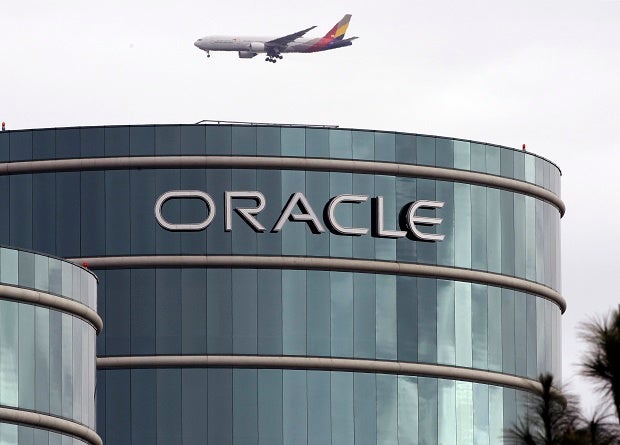 In this Tuesday, March 20, 2012, file photo, a plane flies over Oracle headquarters in Redwood City, Calif. On Thursday, May 26, 2016, a federal jury sided with Google in a long-running legal battle with tech industry rival Oracle in a complex copyright case that was closely watched in Silicon Valley. Oracle had said Google stole some of its software to create Android, the world’s most popular smartphone operating system. Oracle is vowing to appeal. AP FILE PHOTO

Software competitor Oracle claimed Google had stolen its intellectual property and reaped huge profits by copying pieces of an Oracle programming language called Java. But the jury in US District Court found that Google made “fair use,” under copyright law, of Java elements that help different software programs work together.

Oracle, which had sought $9 billion in damages, immediately said it would appeal.

The verdict was closely watched in Silicon Valley, in part because many popular features of today’s smartphones only work because apps can “talk” to one another or the phone’s underlying software. Google’s supporters — a group that included other tech firms, trade associations and the Electronic Frontier Foundation, an Internet rights group — warned that an Oracle victory would hamper future innovation by making that software cooperation more difficult and expensive.

Google argued that because it used only a small part of Java to create Android, a much larger system of software built for a new purpose, it qualified for a “fair use” exemption from copyright. Similar exemptions allow artists and critics to quote or reuse small portions of someone else’s work in a larger essay or creation.

Oracle and its allies simply argued that the company should be paid for the use of its code. While Google lets smartphone manufacturers use Android software without charge, it makes billions of dollars by showing advertising to people who use Google services, including its popular search engine and maps, on Android phones and tablets.

The high-profile dispute was a clash of Silicon Valley titans. While much of the trial focused on arcane aspects of computer programming, jurors heard testimony from prominent tech executives and a pair of multi-billionaire moguls. Google co-founder Larry Page testified in person, while Oracle co-founder Larry Ellison appeared on video.

Jurors also got a glimpse of Silicon Valley’s small world when they heard from Eric Schmidt, now chairman of Google’s corporate parent, Alphabet Inc. Schmidt was an executive of Sun Microsystems when that company created Java. Oracle acquired the rights to Java when it bought Sun in 2010.

The jury’s verdict marks Google’s second victory in the case. US Judge William Alsup sided with Google in 2012, ruling that the APIs weren’t protected by copyright. An appellate court overturned Alsup’s ruling and sent the case back for a second trial.

Oracle said it will appeal the latest verdict on “numerous grounds.” In a statement, Oracle general counsel Dorian Daley added, “We strongly believe that Google developed Android by illegally copying core Java technology to rush into the mobile device market.”

Google welcomed the jury’s finding in its own statement.

“Today’s verdict that Android makes fair use of Java APIs represents a win for the Android ecosystem, for the Java programming community, and for software developers who rely on open and free programming languages to build innovative consumer products,” the company said.

Google piecing together a modular phone