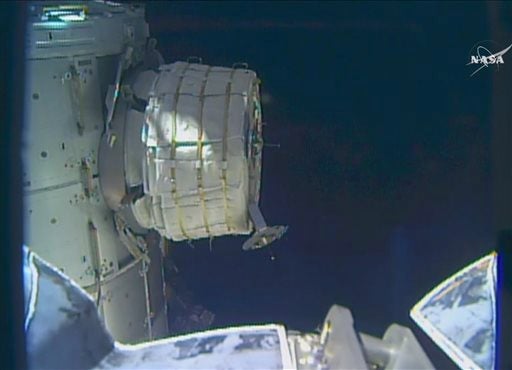 In this frame from NASA TV, a new experimental room at the International Space Station partially inflates Thursday, May 26, 2016. NASA released some air into the experimental inflatable room, but put everything on hold when problems cropped up. (NASA TV via AP)

CAPE CANAVERAL, Fla. — NASA hit a snag while releasing air into an experimental inflatable room at the International Space Station on Thursday and put everything on hold for at least a day.

Mission Control ordered astronaut Jeffrey Williams to call it quits after the operation had dragged on for more than two hours, with the compartment expanding just a few inches. The inflation process could resume as early as Friday, depending on what engineers learn.

“Thanks for all your patience today, and we’ll hope for better luck tomorrow,” Mission Control radioed.

It was supposed to take barely an hour for the commercial test chamber known as BEAM — the world’s first inflatable room for astronauts — to swell four times in volume.

Everything went smoothly at first as Williams opened a valve, allowing air to slowly flow into BEAM, short for Bigelow Expandable Activity Module.

Williams kept the valve open for just a few seconds, then closed it as ground controllers monitored the increasing pressure inside the chamber. He did that four more times before Mission Control told him to stop because of out-of-spec pressure readings. He started up again following the lengthy delay, but once again was urged to pause, this time because of a lack of noticeable size increases. Soon afterward, NASA called the whole thing off.

The operation must be conducted in daylight, with solid communications with Mission Control.

BEAM is the creation of Bigelow Aerospace, founded by hotel entrepreneur Robert Bigelow. NASA paid the North Las Vegas company $17.8 million to test the inflatable-habitat concept at the space station.

The soft-sided, multi-layered Beam measured 7 feet long and nearly 8 feet in diameter when delivered to the station by SpaceX last month. It had grown just a few inches when Thursday’s operation was halted. When fully expanded, the compartment should exceed 13 feet in length and 10 1/2 feet in diameter. That’s the beauty of inflatable spacecraft; they can be packed tightly for launch, then expand and provide lots of room once aloft.

Bigelow Aerospace hopes to launch even bigger inflatable habitats in the future for use by tourists orbiting Earth, as well as professional astronauts bound for Mars.

Williams and his five crewmates are forbidden from venturing inside the empty BEAM until a week after it is fully inflated, so ground controllers can check for leaks. Except for when astronauts go in to take measurements every few months, the hatch will remain sealed.

BEAM is supposed to stay attached to the space station for two years. TVJ