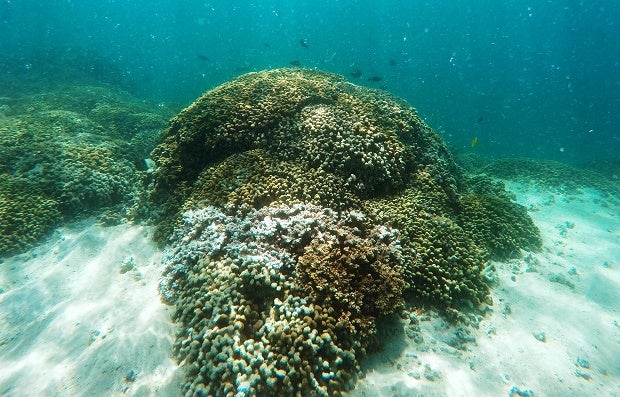 In this Oct. 26, 2015 file photo, a patch of coral reef is shown in Hawaii’s Kaneohe Bay off the island of Oahu near Kaneohe, Hawaii. NASA’s Jet Propulsion Laboratory and reef scientists from around the world are announcing the launch of a campaign Thursday, June 9, 2016, to gather new data on coral reefs like never before. Using specially designed instruments mounted on high-flying aircraft, the scientists are embarking on a mission to map large swaths of coral around the world in hopes of better understanding how environmental changes are impacting these delicate and important ecosystems. The CORAL (Coral Reef Airborne Laboratory) team will study the reefs of Hawaii, Palau, the Mariana Islands, and Australia’s Great Barrier Reef over the next three years. AP FILE PHOTO

COCONUT ISLAND, Hawaii — Coral reefs have almost always been studied up close, by scientists in the water looking at small portions of larger reefs to gather data and knowledge about the larger ecosystems. But NASA’s Jet Propulsion Laboratory is taking a step back and getting a wider view, from about 23,000 feet above.

NASA and top scientists from around the world are launching a three-year campaign Thursday to gather new data on coral reefs like never before.

Using specially designed instruments mounted on high-flying aircraft, the scientists plan to map large swaths of coral around the world in hopes of better understanding how environmental changes are impacting these delicate and important ecosystems.

“CORAL (Coral Reef Airborne Laboratory) is an airborne mission to survey reefs at select locations across the Pacific,” Bermuda Institute of Ocean Sciences’ Eric Hochberg, who is principal investigator for the project, told The Associated Press on Tuesday. “The idea is to get a new perspective on coral reefs from above, to study them at a larger scale than we have been able to before, and then relate reef condition to the environment.” Hochberg and the project’s lead NASA scientist Michelle Gierach were in Oahu’s Kaneohe Bay with The Associated Press on Tuesday to gather baseline data in the water.

While the primary science will be conducted using instruments that map the sea floor from above, the team must also take baseline measurements in the ocean to validate the data they get from the air, Gierach said. Her main role in the project is to decipher the data gathered from the aircraft.

“PRISM, the instrument that we’re using … is the state-of-the-art instrument for addressing coastal and in-water science questions,” Gierarch said. “CORAL wouldn’t be possible without an instrument like PRISM, it’s really the heart and soul of the project.”

Coral reefs drive many tourist economies around the world, but they provide much more than pretty places to dive and snorkel, Gierach said. Reefs are critical habitat for the majority of the fish humans consume and also protect shorelines from dangerous storm surges and rising ocean levels.

“Just realizing that though you may not see a coral, that you may not have your backyard be within this beautiful environment that we’re in right now, corals are impacting you, they are globally important,” Gierach said. “We have to understand how they’re changing so we can make some managed decisions about their future.”

Reefs are among the first ecosystems to be dramatically and directly impacted by global warming, according to the researchers.

The International Society for Reef Studies Consensus Statement, published in 2015, said that over the past few decades, up to 50 percent of coral reefs have been “largely or completely degraded by a combination of local factors and global climate change.”

Julia Baum, assistant professor of biology at the University of Victoria in British Columbia, has done extensive research on coral reefs and told The Associated Press on Wednesday that the data gathered from this kind of project could prove highly valuable for international reef scientists and the conservation community.

“I’m a huge proponent of open source data,” Baum said. “To me, the application of this technology to coral reefs holds great promise, but to fulfill that promise the data has to be made openly available to the scientific community.” The CORAL researchers said all data will be publicly available and will take about six months to process once captured.

Baum acknowledged that a lot of coral reef science has been limited by the lack of broad data sets like this project plans to provide.

“As scientific divers we’re limited by the depth we can work at and the amount of bottom time that we have while we’re diving, so much of underwater marine science, especially on coral reefs is a painstakingly slow process,” Baum said. “This Coral Reef Airborne Laboratory can’t replace scientists in the water, but it can provide a very high-level, complementary type of data.”

The CORAL team will study the reefs of Hawaii, Palau, the Mariana Islands, and Australia’s Great Barrier Reef over the next three years.

READ: Earth Day: Subic corals are nursed back to life