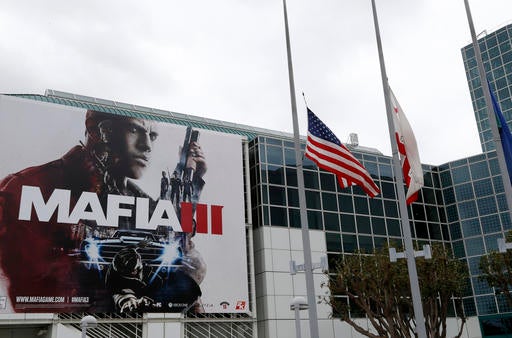 Flags outside the Electronic Entertainment Expo in Los Angeles, fly at half-staff on Monday, June 13, 2016 in honor of the victims of the gay nightclub attack in Orlando. E3 kicked off Sunday and Monday with flashy presentations featuring footage of upcoming games, many of which depict unrelenting gun violence, from Electronic Arts, Bethesda Softworks, Microsoft and Ubisoft. AP PHOTO

LOS ANGELES— The flags outside the Electronic Entertainment Expo are flying at half-staff in honor of the victims of the attack on a Florida gay nightclub that left 49 dead. However, it will seemingly be business as usual inside the video game industry’s annual trade show this week.

E3 kicked off Sunday and Monday with flashy presentations featuring footage of upcoming games — many of which depict unrelenting gun violence — from Electronic Arts, Bethesda Softworks, Microsoft and Ubisoft.

EA, which has a studio in Orlando, did not directly address the shooting Sunday afternoon while hyping games such as the World War I-set military shooter “Battlefield 1” and the robot-filled sci-fi shoot-’em-up “Titanfall 2.”

Chris Plante and T.C. Sottek of the technology site The Verge wrote after EA’s presentation that “witnessing a sales pitch for the fun in gun violence felt strange, to say the least.”

The developers on stage at Bethesda’s presentation Sunday evening sported rainbow ribbons in support of the gay, lesbian, bisexual and transgender community as they showed off games like the arena-based shooter “Quake Champions” and the stylish assassin tale “Dishonored 2.”

“We wanted to say something as the gaming community that we grieve with them,” Spencer said in an interview after the show. “We obviously have great gamers in Orlando and also people around the globe watching, so I don’t think it was a gaming moment. It was a human moment for us as a community of passionate fans knowing that passion can be directed in positive ways but also in times when people are mourning.”

After a colorful opening dance number to promote “Just Dance 2017” set to Queen’s “Don’t Stop Me Now,” Ubisoft briefly addressed the tragedy at the start of its Monday afternoon briefing in a moment that show host Aisha Tyler recognized was “incongruous.”

“Everyone here at Ubisoft wants to offer our deepest sympathies to the people affected by this weekend’s tragedy in Orlando,” said Tyler, who was surrounded by dancers dressed as animals, thunderbolts and candy canes.

Several publishers and developers tweeted their condolences as news of the attack spread Sunday morning. EA called it “senseless and tragic.”

Reggie Fils-Aime, president of Nintendo of America, said in an interview that the attack was “tremendously shocking and devastating.”

“I don’t know that it will directly affect the mood (at E3), but anyone who is a parent or feels they have a voice is certainly going to be thinking about how we, as a country and culture, move forward and address it,” he said.

While many games to be exhibited at E3 don’t feature violence, the shooter genre is among the most popular in the industry. Such games at E3 include Activision’s futuristic military shooter “Call of Duty: Infinite Warfare” and 2K Games’ gangster period piece “Mafia III.”

“The Orlando tragedy was a horrific act of terrorism and a crime of hate,” the Electronic Software Association, which organizes E3, said in a statement. “Our thoughts are with the families of all those affected.”

The organization said security and personnel already were in place to ensure attendees’ safety.

“We’re very ever-vigilant about security and always have been,” said Rich Taylor, senior vice president at ESA. “We take the protection of those who attend this show very seriously.”