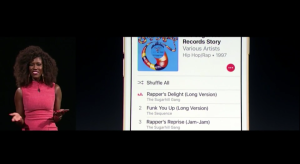 Apple’s Worldwide Developers Conference 2016 has officially started and they announced loads of new updates. The most interesting by far is the keynote of Apple’s Bozoma Saint John.

According to Wired, head of Marketing for Apple Bozoma Saint John stole the show during her keynote for Apple’s new and improved Apple Music. The male dominated audience was agape when this sassy marketing exec cued up The Sugarhill Gang’s “Rapper’s Delight” as part of her presentation. She continued on with the details of Apple Music’s updates without missing a beat.

From the moment Saint John took the stage up to when she sashayed backwards as she exited the stage, she had everyone’s attention. A feat that not many executives talking about improvements to their products could pull off no matter their reputation.

Bozoma Saint John, or ‘Boz’ to her friends, has been at the top of Apple Music’s marketing division since April of 2014. She’s a veteran in the music industry and has worked with icons like Eminem, Nicki Minaj, and Kanye West.

Now if every executive was as cool as her, then  keynotes could be a little more interesting than the usual humdrum presentations. Alfred Bayle