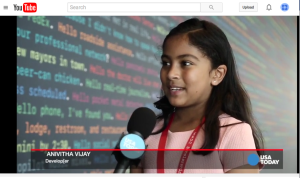 As much as she wanted to see the rest of WWDC, little Anvitha, already a bit of a celebrity, kept getting pulled away by interviews. Image captured from USA Today’s Interview.

The 2016 Apple Worldwide Developers Conference (WWDC) teems with surprises. This time it didn’t come from Apple but rather from a diminutive coder, nine-year-old Anvitha Vijay.

According to a report from Fast Company, Anvitha was invited to the conference as part of Apple’s scholarship program. She received a VIP seat at the Monday press event and was personally introduced by CEO Tim Cook to thousands of her fellow developers.

Anvitha is of Indian descent but currently hails from Melbourne, Australia. She got into programming when she was 7 after creating an app concept called GoalsHi. This won her $10,000 in a Perth contest. It was then that she was encouraged to get into coding to realize her concept.

Her efforts culminated into the Smartkins Animal app that shows different animals in rapid succession along with their respective animal sounds. She states that the app helps stimulate right brain learning. The other app she created is Smartkins Rainbow colors which helps kids learn colors through different-colored animated monsters.

She’s a firm believer that coding should be taught in school and is very excited about Apple’s kid-oriented development tool Swift Playgrounds.

Finally, Anvitha says she wants to become an innovator that will build things that people love and that make a difference in their lives.

Ingenious as Anvitha is, however, she is still a kid and like most kids, the next stop after WWDC is apparently Disneyland. Alfred Bayle