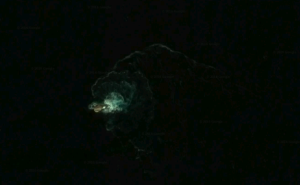 A video uploaded on video-sharing site YouTube showed an aquatic disturbance inside the polar circle of the Antarctic region, as viewed in Google Earth. Based on the clip, the object is about 75 feet wide, and its physical attributes could terrify anyone as it resembles a typical underwater monster one sees in movies. The eerie video, with spooky background music, has drawn 1.5 million views as of this writing.

Saying sea monsters are a “thing of  past,” the Huffington Post and The Verge said the object seen on Google Earth was not a monster but a rock formation called “Sail Rock,” located at 63° 2’56.73″S 60°57’32.38″W north of mainland Antartica and southwest of Deception Island.

Andrew David Thaler of Southern Fried Science posted a nautical chart of “Sail Rock” on Google Maps measuring 100 feet tall, slashing spooky theories that the edifice is a creature wishing to devour other creatures in the icy continent.

Hawk-eyed Google users deliberated that the rock formation might be Cthulhu, a fictional squid-like sea giant created by American author H.P Lovecraft, or Kraken, a legendary sea monster swimming in the seas of Greenland and Norway. Gianna Francesca Catolico