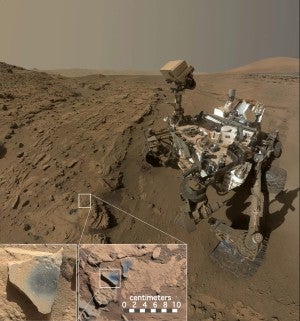 NASA’s Curiosity rover discovered manganese materials in Martian rocks, suggesting that the Mars of old may have been oxygen-abundant like our Earth is today.

The NASA report states that the creation of manganese involved the participation of microbes or atmospheric oxygen. While the rust covering the planet surprisingly needs small amounts of oxygen to occur, manganese requires much more for it to form. The manganese deposits that the rover found also needed excessive amounts of water to develop.

The question now is, where did all the water and oxygen go? Researchers hypothesize that as the planet’s magnetic field collapsed, ionizing radiation from space cased the hydrogen and oxygen atoms in water to separate. The hydrogen simply floated off the atmosphere while the oxygen began to seep into the surface, eventually forming the rust-ridden terrain that we are more familiar with.

This suggests that millennia ago, Mars was habitable and may have actually held Martian lifeforms. As far as our current scientific knowledge dictates, oxygen is one of the most necessary components to support terrestrial life.