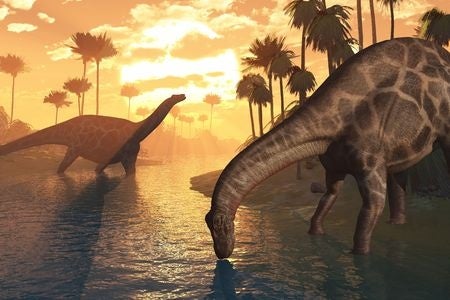 PARIS, France — The dinosaurs’ long reign was not ended by a merciful knockout punch, but by a torturous millennia of climate change before and after the oft-blamed space rock slammed into Earth, scientists said Tuesday.

The impact at Chicxulub in modern-day Mexico certainly contributed to the disappearance of the giant lizards and other creatures, but was by no means the sole cause, a team concluded in a study published in Nature Communications.

Of 24 mollusk species which went extinct at one Atlantic island, 10 did so long before the extraterrestrial rock — either a comet or an asteroid — rammed into our planet some 66 million years ago, they wrote.

The other 14 disappeared in a second extinction wave that started with the deadly strike contributing to the second-biggest ever mass extinction of life on Earth — including all non-avian dinosaurs.

The species wipeout, said a trio of US-based researchers in the new paper, was caused by two periods of global warming — the first sparked by monster volcanic eruptions in what is India today, and the second by the space rock impact itself.

Both sets of calamities would have emitted ash and dust with short-term Sun-blocking and cooling effects, but also massive ejections of planet-heating greenhouse gases that would have caused “warming episodes” in the longer term.

“We find that the end-Cretaceous mass extinction was caused by a combination of the volcanism and meteorite impact, delivering a theoretical ‘one-two punch’,” said study co-author Sierra Petersen of the University of Michigan, using boxing terminology.

The team analyzed the chemical composition of 29 fossilized mollusk shells from the period, to compile a brand-new temperature record spanning 3.5 million years over the end of the Cretaceous and beginning of the Paleogene eras.

The shells lived 65.5 to 69 million years ago in a shallow coastal delta near the northern tip of the Antarctic peninsula, said a statement from the university.

At the time, the now ice-covered continent was likely covered by coniferous forest.

A second spike on the thermometer, about 1.1 C, followed some 150,000 years later, around the time of the impact.

“This new temperature record provides a direct link between the volcanism and impact events and the extinction pulses — that link being climate change,” said Petersen.

Scientists have long debated the cause of the so-called Cretaceous-Palaeogene (K-Pg) mass extinction, which was followed by the rise of the mammals.

Some blame the impact, some volcanism, others a combination.

Recent studies have pointed to the role of volcanic eruptions that came after, rather than before, the meteor crash.

Pre-impact warming due to volcanism “may have increased ecosystem stress, making the ecosystem more vulnerable to collapse when the meteorite hit,” the team concluded.

In today’s world, scientists warn that planet warming caused by humankind’s burning of fossil fuels for energy, is contributing to another mass extinction event, the sixth in half a billion years.