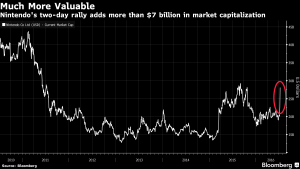 The graph represents Nintendo’s market value in the past few years and encircled at the end is the almost 90-degree rise since the debut of Pokemon Go. Image Bloomberg

According to Bloomberg, the Pokémon Go app has topped smartphone rankings as fans continue to download the app to start their own pokemon adventure.

Nintendo stocks have also jumped the most since the company began trading in Tokyo in 1983 and was 24 percent higher than the previous update.

Despite Nintendo’s earlier resistance in shifting toward the smartphone market, it is now enjoying the benefits of finally giving in. The company is currently trying to catch up with the rest of the competition through Niantic as well as a venture with DeNA Co. for future mobile titles.  Alfred Bayle