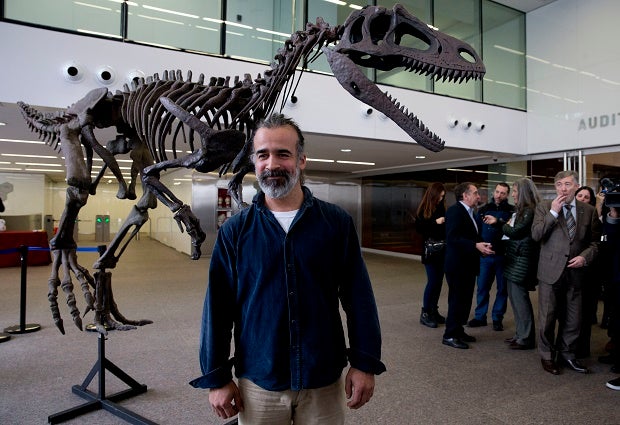 Argentine paleontologist Sebastian Apesteguia poses beside what he says is a replica of newly-discovered carnivorous dinosaur that lived in Argentina about 90 million discovered in Argentina’s Patagonia in Buenos Aires, Argentina, Wednesday, July 13, 2016. The team of scientists says it was up to 26 feet long but its arms only measured about 2 feet. AP

BUENOS AIRES, Argentina — Unearthed fossils from a carnivorous dinosaur that lived in Argentina about 90 million years ago show that it had tiny arms compared to its body, scientists said on Wednesday.

The team of scientists said the two-legged dinosaur was from 20 feet to 26 feet long but its puny pair of arms only measured about 2 feet, or about the size of a human child. It was a Theropod like other meat-eating dinosaurs including the Tyrannosaurus rex.

“Something totally new has been discovered, a new lineage that we didn’t know of before,” Argentine paleontologist Sebastian Apesteguia said at a news conference in Buenos Aires after the team published it conclusions in the PLOS ONE journal.

“Why did this specie have a reduction regarding the size of their arms, having only two fingers similar to a Tyrannosaurus? That’s something that we still don’t know. But we need to investigate it.”

The fossils were found in Argentina’s northern Patagonia region in 2007. But difficulties postponed the team’s analysis. The team thus combined the native word for “evil spell” with the last name of Field Museum fossil preparator Akiko Shinya, who discovered the first fossils to name the dinosaur “Gualicho shinyae.”