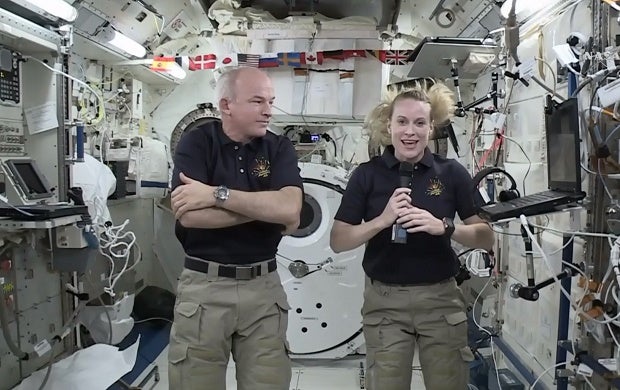 In this image made from video provided by NASA, astronaut Kate Rubins, right, speaks during an interview aboard the International Space Station on Wednesday, July 13, 2016. At left is Expedition 48 Commander Jeff Williams. Rubins will attempt to complete the first full-blown DNA decoding, or “sequencing,” in orbit. The device will be delivered to the International Space Station in the next SpaceX delivery. AP

CAPE CANAVERAL, Florida — The first virus-hunter in space is all set to conduct some cosmic, new DNA research.

Newly arrived space station astronaut Kate Rubins will attempt to complete the first full-blown DNA decoding, or “sequencing,” in orbit with a pocket-size device that should be delivered next week.

“We’re really interested in how this works in microgravity. It’s never been done before,” she said in an interview with The Associated Press on Wednesday, four days after arriving at the International Space Station.

She said the benefits of DNA sequencing in space are huge. She noted it also could prove useful in remote locations on Earth.

The device will arrive at the orbiting lab on the next SpaceX delivery. Liftoff is scheduled for early Monday morning from Cape Canaveral.

Trained as a professional virus-hunter, Rubins traveled to Congo for her research before becoming an astronaut in 2009. She wore top-level biosafety suits for her work with Ebola, smallpox and other deadly viruses on Earth, but won’t need such extreme precautions when she fires up the device in space.

At the space station, Rubins will be working with harmless test samples: bacteria, a virus and a mouse genome.

“We’ve got a lot of safety folks on the ground making sure that nothing dangerous gets on board,” said the first-time space flier.

Researchers initially wanted to fly “extreme and bizarre” samples, but decided to stick with well-sequenced, well-understood genomes for easy comparison, said Sarah Wallace, a microbiologist at NASA’s Johnson Space Center in Houston. Control tests will be conducted on Earth, including by aquanauts who will move into an underwater habitat next week off the coast of Key Largo, Florida. The machine is already commercially available.

A DNA sequencer reveals the order of chemical building blocks along a stretch of DNA. That sequence contains the hereditary information that’s passed from one generation of organisms to the next. Among other things, that can be useful to identify and study viruses.

“Altogether, it’s an extremely exciting research package and a great capability on board station,” Rubins said.

Researchers will better understand bone loss and microbial changes in space, Rubins noted, thanks to this new research.

“But it also actually has a benefit for the Earth-based research as well,” she said. “When we do things in a remote environment up here, we can understand how these technologies might work in remote places on Earth that don’t have access to good medical care.”

NASA is interested in another potential application: the detection of life. Officials acknowledge more development would be needed for that capability at Mars and elsewhere.

The miniaturized biomolecule sequencer, called MinION by its maker in England, is less than 4 inches long and just 4 ounces including a USB cable. It hooks up to a laptop or electronic tablet.

“Picture your smartphone and cut that in half,” Wallace said.

The results will be beamed down following each experiment and analyzed by researchers on Earth. Microbiologists are particularly interested in how the liquid test samples will behave in weightlessness, especially if bubbles form.

Although the device is meant to be foolproof and used by anyone on the crew, “we are so fortunate to have Kate up there” to perform the first tests, Wallace noted. Rubins was heavily involved with the study from the beginning.

Following this initial $45,000 experiment, the DNA sequencer will remain on board for possible further use — conceivably even for diagnosing astronaut health in the off-chance of an infectious outbreak.

Oxford Nanopore Technologies, the company behind the experiment, said the device going to space is the same model already used by more than 1,000 scientists in 30 countries.

Rubins arrived at the space station on Saturday, along with a Russian and Japanese, for a four-month stay. They launched from Kazakhstan on a Russian rocket.