Facebook star killed ‘by brother for honor’ in Pakistan 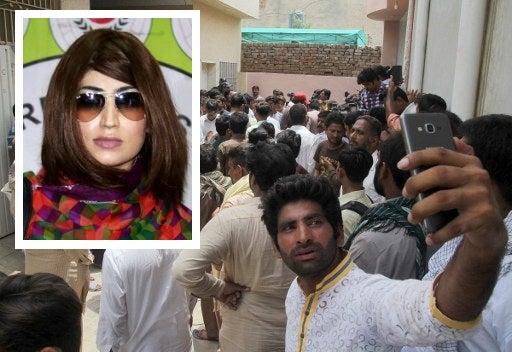 A Pakistani resident takes a selfie photograph outside the home of social media celebrity, Qandeel Baloch (inset) following her murdered in Multan on July 16, 2016. The Pakistani social media celebrity whose selfies polarized the deeply conservative Muslim country has been murdered by her brother in a suspected honor killing, officials said on July 16, prompting shock and revulsion. AFP

MUZAFFARABAD, Pakistan — A Pakistani social media celebrity whose selfies polarized the deeply conservative Muslim country has been murdered by her brother in a suspected honor killing, officials said Saturday, prompting shock and revulsion.

Qandeel Baloch, praised by many of the country’s youth for her willingness to break social taboos but condemned by conservatives, was strangled near the city of Multan, police said.

“Qandeel Baloch has been killed, she was strangled to death by her brother. Apparently it was an incident of honor killing,” Sultan Azam, senior police officer in Multan, told AFP.

Baloch, believed to be in her twenties and whose real name was Fauzia Azeem, had traveled with her family to Muzzafarabad village in central Punjab province for the recent Eid holiday.

She was killed there Friday, police said, adding that the brother, Wasim, was now on the run.

Up to 100 officers were gathered outside her family’s home in Muzzafarabad, an AFP reporter there said. Five ambulances were also parked nearby.

Police later registered a murder case against her brother based on her father’s written complaint, in which he accused his son of killing his daughter for honor because “his son wanted her to quit showbiz”.

Hundreds of women are murdered for “honor” every year in Pakistan.

The killers overwhelmingly walk free because of a law that allows the family of the victim to forgive the murderer — who is often also a relative.

Filmmaker Sharmeemn Obaid-Chinoy, whose documentary on honor killings won an Oscar earlier this year, slammed Baloch’s murder as symptomatic of an “epidemic” of violence against women in Pakistan.

News of the murder was trending on social media in Pakistan, with liberal users praising Baloch’s bravery, but some conservatives — including users identified as women — condemning her relentless self-promotion.

In one typical comment, Twitter user @JiaAli wrote: “Someone had to do it. She was a disgrace.”

But Facebook user Zaair Hussain said: “RIP Qandeel Baloch. You made us laugh, and you made us applaud,” adding that history would remember her as a “provocateur”.

‘No woman is safe’

Baloch shot to fame in Pakistan in 2014 after a video of her pouting at the camera and asking “How em looking?” went viral.

Her defiance of tradition and defense of liberal views won her many admirers among Pakistan’s overwhelmingly young population.

But in a country where women have fought for rights for decades, and acid attacks and honor killings remain commonplace, she was also reviled by many and frequently subject to misogynist abuse.

Baloch provoked controversy last month after posing for selfies with a high-profile cleric, who was sternly rebuked by the country’s religious affairs ministry.

Earlier this year she vowed to perform a striptease if Pakistan’s cricket team beat India at the World T20, though they later lost.

“People are going crazy — especially girls. I get so many calls where they tell me I’m their inspiration and they want to be like me,” she told AFP after posting a provocative selfie on Valentine’s Day.

In her last interview with Pakistan’s biggest English-language newspaper Dawn she spoke of being married against her will at age 17 to “an uneducated man” with whom she had a child, adding that they later divorced.

She had reportedly spoken of leaving the country out of fear for her safety, with Dawn reporting that her request to officials for protection had been ignored.

Obaid-Chinoy told AFP the murder showed no women in Pakistan would be safe “until we start sending men who kill women to jail”.

“There is not a single day where you don’t pick up a paper and see a woman hasn’t been killed,” the maker of “A Girl in the River: The Price of Forgiveness” told AFP, adding: “This is an epidemic”.

Obaid-Chinoy’s film was hailed by Pakistan’s Prime Minister Nawaz Sharif, who in February vowed to push through anti-honor killing legislation.

No action has been taken since then, despite a recent fresh wave of attacks on women.

“Activists have screamed themselves hoarse,” said Obaid-Chinoy. “When will it stop?”/rga