No ‘Pokemon Go’ yet in Japan, but government already worried 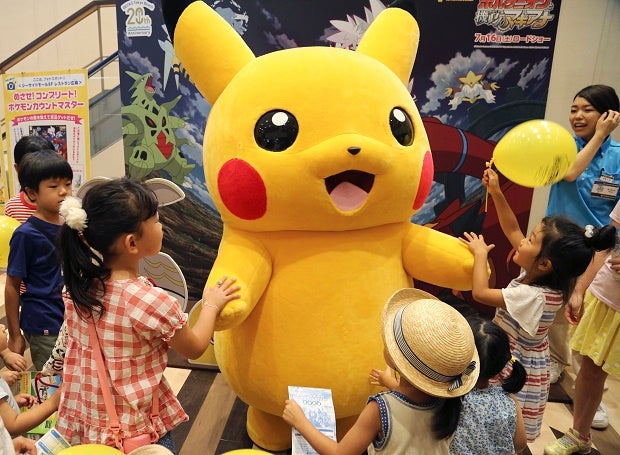 In this Monday, July 18, 2016 photo, a stuffed toy of Pikachu, a Pokemon character, is surrounded by children during a Pokemon festival in Tokyo. “Pokemon Go,” a compulsive smartphone game has not been made available to the Japanese public yet as of Wednesday, July 20, 2016, as a rumor circulated on the internet that it would come out on that day. AP

TOKYO — The “Pokemon Go” craze has yet to hit Japan, but reports of robberies, traffic accidents and other mishaps abroad already have the government worried.

In a one-page flier, the government-run agency has released nine tips advising players of the augmented reality game to be cautious of scams and their personal safety as well as to carry extra batteries and be mindful of heatstroke.

Fans are eagerly awaiting the launch of “Pokemon Go” in the character’s country of birth. A report that the game would finally be released in Japan on Wednesday raised expectations, but turned out to be false.

That left gamers in Akihabara, Tokyo’s center for all things tech, still pining to start catching Pokemon in their neighborhoods.

“There are people who have achieved a high score abroad, so I hope it gets released in Japan soon,” 16-year-old Souta Horime said.

The game was launched two weeks ago in the United States, Australia and New Zealand, and is available in more than 20 countries, mostly in Europe and North America.

The developer, Niantic, has not announced a release date for Japan. McDonalds Japan, though, said in a brief statement late Wednesday that it is collaborating with “Pokemon Go” and that the project will be launched soon.

Motomasa Takahashi, 21, said he would be careful playing the game, after seeing reports of accidents related to it. A driver who crashed into another car in Fall City, Washington, in the US, reportedly told authorities he was distracted by the game.

Takahashi said he was fascinated with the game and unhappy that it has been already released elsewhere but not in Japan, even though it is the birthplace of Pokemon.

Serkan Toto, a games industry consultant in Tokyo, said Pokemon itself may be Japanese in origin, but “Pokemon Go” is an American-developed game with a Japanese character or characters layered on it. He also pointed to reports that fears of server outages, which have disrupted the game elsewhere, may be delaying the release.

“Nowhere in the world are the mobile gamers, the end consumers, as critical as in Japan. In the US, people are accustomed to slow networks, to server outages,” he said.

Naoki Sakuraba, 21, saw a silver lining in the delay. He is anticipating that Japanese fans will get an improved version of the game as technological glitches reported in other countries are repaired.