How much exercise will lower risk of chronic disease? 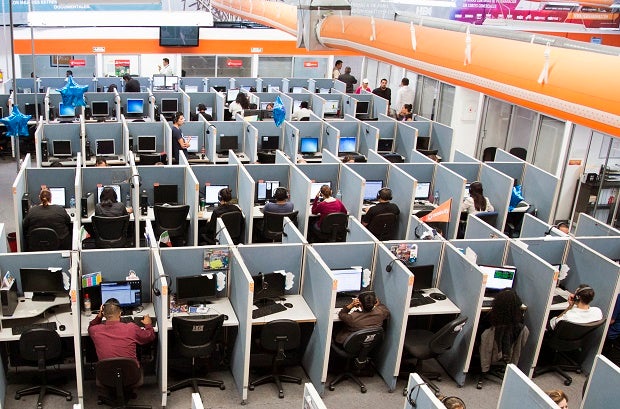 In this Aug. 13, 2014 file photo, workers sit at desks at a call center in the northern border city of Tijuana, Mexico. If you spend all day sitting, then you might want to schedule some time for a brisk walk – just make sure you can spare at least an hour. Scientists analyzing data from more than 1 million people found that it takes about 60 to 75 minutes of ‘moderate intensity’ exercise to undo the damage of sitting for at least eight hours a day. Not exercising and sitting all day is as dangerous as being obese or smoking, they found. AP FILE

PARIS, France — The daily dose of activity needed to lower the risk of diabetes, stroke and heart disease by at least 20 percent is several times the minimum recommended by the World Health Organization, researchers said Wednesday.

The same applies to breast and bowel cancer, they reported in a study reviewing 35 years of research on the link between physical exertion — whether gardening or long-distance running — and five chronic diseases.

The benefits of exercise are well known and beyond dispute.

Most health authorities issue guidelines on the bare minimum required to help ward off numerous ailments made worse by a sedentary lifestyle.

But despite a mountain of research, “we still do not definitively know how much the type and quantity of physical activity reduces the risk of common conditions,” a team of scientists led by Hmwe Kyu of the Institue for Health Metrics at the University of Washington in Seattle said in a statement.

One problem has been finding a unit of measure that can be applied to actions as varied as walking one’s dog, jumping rope, or having sex.

Enter the MET, or “metabolic equivalent of tasks”, a concept developed in the 1990s and adopted more recently by the WHO.

Metabolism is the conversion of food and drink into energy.

When we are at rest — watching television, for example — we have a metabolic rate of “one”.

Using this as a baseline, scientists assign values to different activities depending on how much energy they consume.

Strolling at a leisurely pace, for example, burns up twice the energy as sitting still, which gives it a value of MET 2. Vigorous running is a MET 8 activity.

This scale makes it possible to compare the two: 10 minutes of running is the equivalent of 40 minutes of walking, and both have a value of “80 MET minutes” — the amount of energy one would consume while watching a couple of episodes of Game of Thrones.

Canvassing nearly 200 studies in half a dozen countries — including the United States, China, India and South Africa — the researchers found that sharp reductions in disease risk required at least 3,000 to 4,000 of these “MET minutes” per week.

Compared to a couch-potato existence, that level of physical exertion cut the risk of diabetes and breast cancer by more than 20 percent, they reported.

For colon cancer, heart disease and stroke, the risk fell by more than a quarter.

But at the level recommended by the WHO — 600 MET minutes — there was hardly any impact at all, according to the study, published in the BMJ.

“People who achieve total physical activity levels several times higher than the current recommended minimum level have a significant reduction in the risk of the five diseases studies,” it concluded.

The additional benefits of even more exercise or exertion dropped off quickly above that threshold, they added.

“This study represents an advance in the handling of disparate data on a lifestyle factor that has considerable importance for the prevention of chronic diseases,” said Philippe Autier, a professor the International Prevention Research Institute in Lyon, commenting on the study.

“The takeaway message here is that the gains linked to physical effort rise sharply between 600 and 4,000 MET minutes per week,” he told AFP.

But what we still don’t know, he added, is whether short bursts of intense exercise are better for health than an equivalent expenditure of energy spread over a longer period.