After completing its checklist for the day, the Flying Bum went in for a landing only to slowly drop from the sky in an angle, damaging itself upon hitting the ground.  Image Hybrid Air Vehicles

The world’s largest aircraft, aka the Flying Bum, which made its maiden flight just a week ago, has experienced its first ever crash on its second test flight.

The Verge reports that the aircraft took off in the morning for a second round of test flights. After an hour and a half of going through the set of tasks for the day, it went in for a landing where it took a little bit of a tumble.

The Flying Bum suddenly tilted almost 45-degrees and did a slow nosedive while hovering over its landing space. A video of the incident captured by eyewitnesses on the ground was posted on YouTube which showed how the Airlander 10 tilted then slowly “dropped” at an angle.

Hybrid Air Vehicles tweeted that the crew was uninjured and the only damage sustained was on the aircraft’s cockpit. The tweet also denied that the aircraft hit a telegraph pole or received any other damage on the way down. 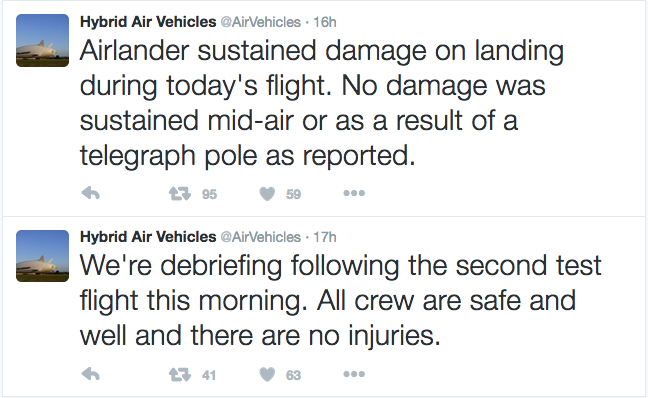 Hybrid Air Vehicles assured everyone that the pilots were safe and uninjured while the aircraft incurred a damaged cockpit. Screencapped from @AirVehicles

At the same time, an official statement said the Airlander 10 experienced a heavy landing that resulted in a damage on the front of the flight deck.  Alfred Bayle