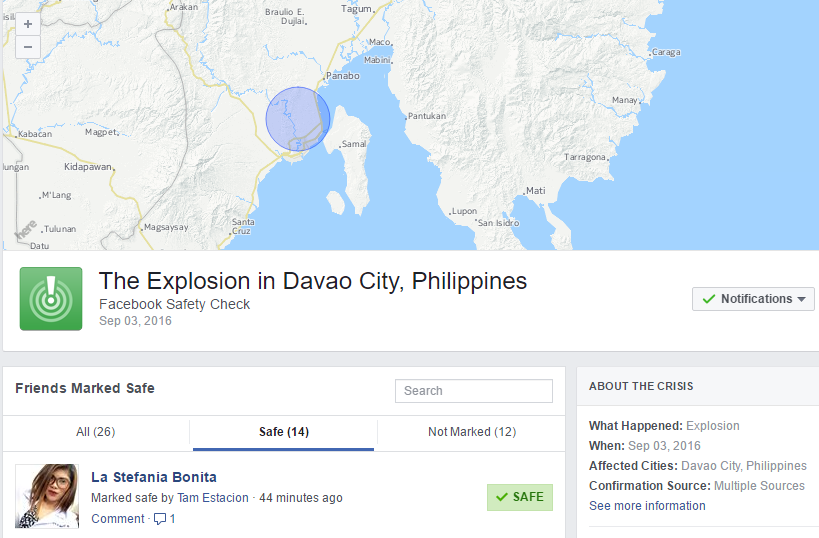 After a blast struck a crowded night market in Davao City, social networking site Facebook has activated its Safety Check tool Friday, allowing Filipinos to check on their loved ones.

At least 10 people were killed and 60 were wounded at the blast, according to Presidential Spokesman Ernesto Abella.

The tool lets Facebook users in Davao City and nearby places inform their friends and contacts of their status by marking themselves safe.

Users may also mark their friends safe if they were not able to go online.

The feature is automatically enabled for users detected to be in affected areas based on the cities listed in their profiles, the last city they were located or the location where they are accessing the internet.

Initially used in Japan during the 2011 earthquake and tsunami that affected 12.5 million people, the tool is now available worldwide on Android, iOS, feature phones and desktop.

ADVERTISEMENT
TOPICS: Davao Blast, Davao City, Davao Explosion, Ernesto Abella, Facebook, Safety Check Tool
Read Next
Samsung considers global recall of Note 7 over battery issues
EDITORS' PICK
Mandaluyong fire put under control hours after it started
Leveling up your ‘lutong bahay’ with the kitchen companion you never knew you needed
Bato de la Rosa, Risa Hontiveros back bill increasing female recruitment quota in PNP
Quarantine violations still punishable despite deleted provisions in ‘Bayanihan 2’ – Bato dela Rosa
Someone from the Philippines can become $356 Million richer this Tuesday
Cherry Mobile teams up with Cloud Panda PH, launches online store
MOST READ
‘If I had not been SolGen, I will make you eat your words,’ Calida tells Coco Martin
5 car dealership outlets shutting down
51 percent of German firms holding back investments in PH, but not because of COVID-19
Senate OKs bill authorizing president to postpone opening of classes beyond August
Don't miss out on the latest news and information.