Microsoft has most number of open source contributors on GitHub 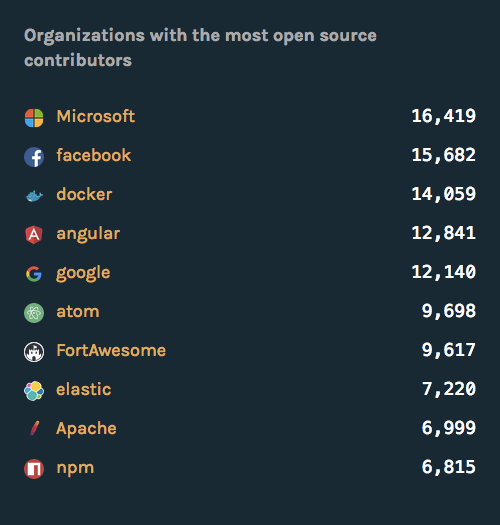 The latest data from GitHub lists the companies that have the most number of contributors and Microsoft is at the top of the pile.  Screengrabbed from GitHub Octoverse

There was a time when Microsoft held its code and technology top secret. But under CEO Satya Nadella, the company has embraced open source and now has the most number of GitHUb contributors.

The Next Web reports that the latest data from GitHub lists Microsoft as the company with the highest number of contributors at 15,682, surpassing Facebook and Google.

Microsoft’s move to open source started back in 2014 when the .NET framework was open-sourced. Afterwards more of the company’s software followed, including Chakra Javascript engine, Xamarin, the Computational Networks Toolkit for deep learning application, Visual Studio’s MSBuild compiling engine and, most recently, PowerShell.

On another note, Microsoft’s Visual Studio Code text editor was listed as the most number of contributors in GitHub’s list of repositories.  Alfred Bayle