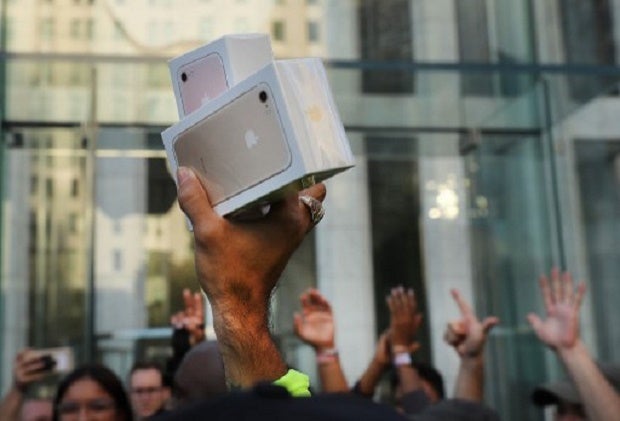 One of the first customers to buy a new iPhone walks out of an Apple store in Manhattan on September 16, 2016 in New York City. People around the globe waited in long lines to be among the first to purchase both the iPhone 7 and the iPhone 7 Plus. The phones offer longer battery life, faster browsing, a better camera and do not have a traditional headphone jack. AFP

Scenes in Apple stores around the world on Friday were reminiscent of days before online ordering became a norm and people camped out for days to be first to get hands on the California company’s iPhone 7 and 7 Plus.

Enthusiasm was peppered with disappointment due to shortages of the large-screen iPhone 7 Plus and a jet-black iPhone 7, but it was unclear if the shortages were the result of strong demand or limited supply.

“These initial sales will be governed by supply, not demand,” Apple said in a released statement which noted that the company would not provide launch weekend sales figures.

Investors evidently weren’t certain of what to make of the launch as well, with Apple shares down about a half-percent to $114.92 at the close of trading on the Nasdaq exchange.

BTIG research said in a note to investors that, despite a lack of lines, analysts there expected iPhone sales in the final quarter of this year to grow 3.6 percent to 77.5 million.

At the Apple Store in the Georgetown district of the US capital Washington, dozens of consumers were still waiting in line hours after the store opening to get the new handsets.

“I tried to order it online, but I would have had to wait five to six weeks, so standing in queue was the only option,” said Naval Chopra, who was visiting from India at the time of the launch and joined the waiting group at 5:30 am for an iPhone 7.

“If you’re an Apple fan, there is something special about getting the new phone on the launch day.”

Washington resident Isaac Combs said he had being hoping to get the large-screen iPhone 7 Plus but learned on arrival they were sold out. Still, he opted for the iPhone 7, despite the smaller display.

The iPhone, Combs said, “is an essential part of life, it’s something I use every day.”

Apple sold of out the larger models quickly and had limited availability of the iPhone 7, with the new jet-black color especially scarce.

READ: iPhone 7 Plus and jet black variants sold out

The devices chart a new path for the tech giant by eliminating headphone jacks, a move seen as setting a trend for a wireless future.

Apple is seeking to regain momentum and set new trends for the industry, but it remains to be seen if it can generate the same enthusiasm that surrounded previous versions of the iPhone.

While the company has touted total iPhone sales of one billion, the number sold in the quarter ending June 25 fell 15 percent from a year earlier, highlighting concerns over growth for the key profit driver.

Apple also faces stiff competition from traditional rival Samsung, although the South Korean giant is currently on the back foot after being forced into a massive recall because of exploding batteries of its flagship Galaxy Note 7.

“With the iPhone 7 off to a strong start, we anticipate improving replacement sales versus the 6S and a return to iPhone unit growth,” he said in a research note.

Analysts were divided over the cause of the shortages, with some saying the handset was more popular than expected, while others suggested the tech titan may be deliberately limiting supply or could be experiencing supply problems.

“They’re possibly keeping supply artificially low, or at least lower than demand, so as to avoid having the oversupply of previous years.”

READ: iPhone ‘Home’ button rumored to be heading for the exit

As Asia woke up, consumers in Sydney who had camped out in the rain were among the first in the world to get their hands on the new phones – though others were left bitterly disappointed.

Bishoy Behman, 17, had been sitting outside the Apple store since Wednesday morning but said he and others in the queue found out on Thursday that some models were already sold out.

“I really wouldn’t have lined up if I had known that,” he told AFP. “For them to have not allocated some stock is ridiculous.”

In Hong Kong, some customers were seen near the Apple store in the Causeway Bay shopping district, reselling new phones at a profit.

In mainland China, a key market for Apple, scenes were energetic as crowds of customers tested out the new handsets.

Apple faces a complicated picture in China, where it ranked only fourth in the Asian giant’s smartphone market in the first half of this year, facing strong competition from low-cost manufacturers.