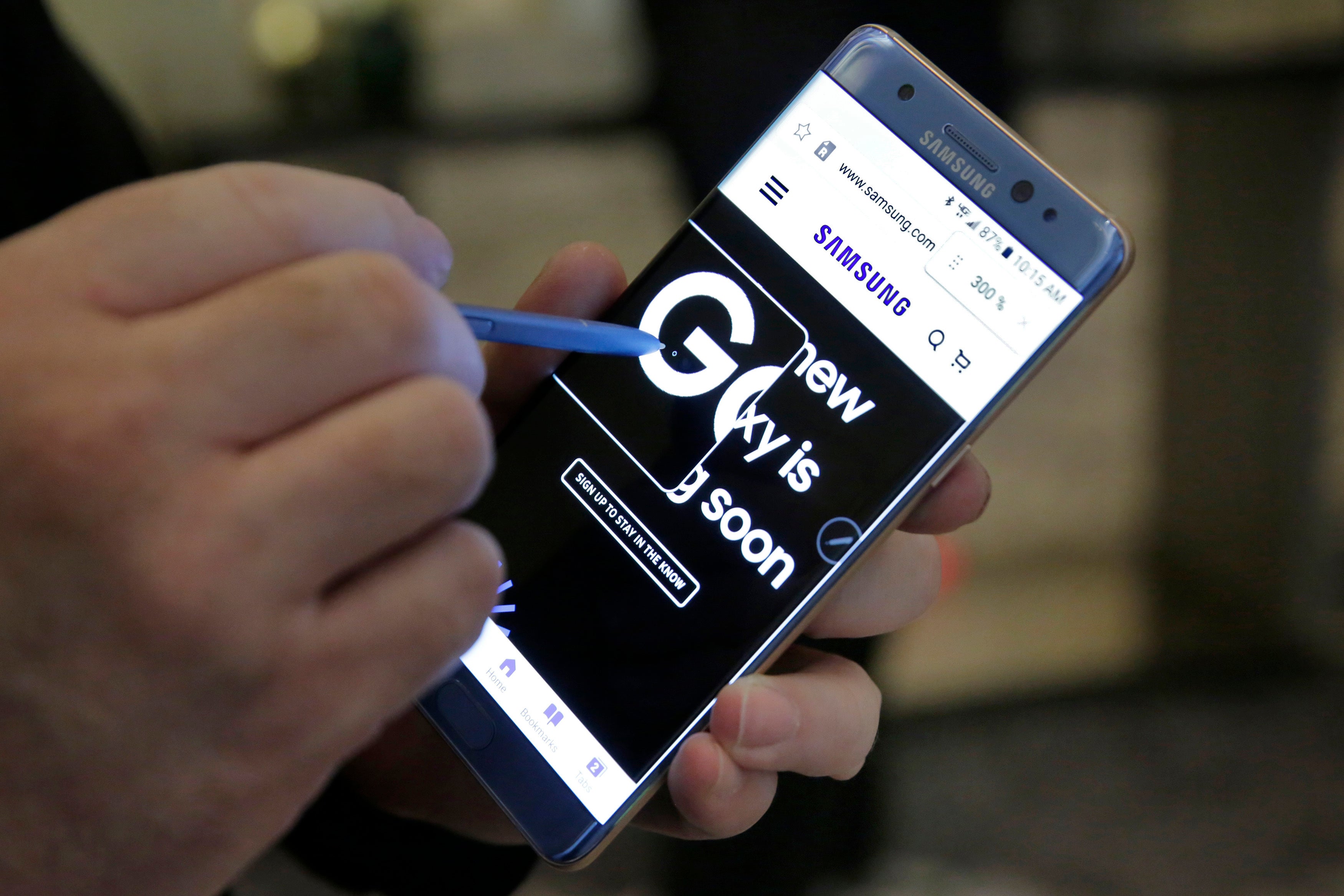 In this July 28, 2016, file photo, a screen magnification feature of the Samsung Galaxy Note 7 is demonstrated, in New York. Samsung says new Galaxy Note 7 smartphones will be available in U.S. stores starting Wednesday, Sept. 21, 2016, to replace about 1 million devices that are being recalled because of a problem with batteries catching fire. AP File Photo

SEOUL, South Korea—Exploding batteries and an embarrassing recall of a flagship gadget during a controversial, closely-watched leadership transition—it’s been a bad year for Samsung, and analysts warn the trouble isn’t over yet.

With ever-fiercer competition in the saturated smartphone market, South Korea’s biggest firm is desperate to avoid a full-blown disaster that could cost billions, hammer its reputation and taint its new leadership.

Just weeks after the early roll out of the Galaxy Note 7 “phablet,” the world’s largest maker of smartphones was forced to recall 2.5 million units globally following complaints its battery exploded while charging.

READ: Samsung: Note 7 explosions in China not caused by batteries

“Samsung appears to have rushed fast to roll out the Note 7 with the iPhone 7 in mind… and it is paying a hefty price now,” said Greg Roh, analyst at Seoul-based HMC Investment & Securities.

With images of charred phones flooding social media, the unprecedented recall was a humiliation for a firm that prides itself as an icon of innovation and quality—and the timing of the crisis could not be worse.

The Note 7 was meant to underpin growth this year as Samsung struggles to boost sales, squeezed by Apple in the high-end sector and Chinese rivals in the low-end market, as profit has stagnated.

One bright spot this year was the flagship handset Galaxy S7, which earned rave reviews and boosted operating profit to a two-year high in the second quarter. The Note 7 was crucial to sustaining that momentum.

The recall, currently underway in 10 nations, could cost the firm $3 billion in the long run, some analysts say, while Roh warned the fallout could significantly hurt profit for months.

The crisis has also shaved $15 billion off its market value since late August, when the firm’s share price hit the highest point so far this year.

While unconnected, Samsung said last week it had sold shares in four technology companies to free up money, in a move it said was “aimed at focusing on our core business.”

Samsung and its sister firms have in recent years divested from non-core operations as the parent Samsung Group sought to streamline business amid a generational power transfer in the founding Lee family.

The group wants to nurture public support ahead of the controversial, closely-watched handover amid lingering questions about the leadership credentials of the Lee family’s scion and an overall lack of transparency in governance.

Lee Kun-Hee, the head of Samsung Electronics as well as the parent Samsung Group, has been bedridden since suffering a heart attack in 2014 with his 48-year-old son, J.Y. Lee, presumed to take over.

The junior Lee, currently vice chairman of Samsung Electronics, was nominated two weeks ago as the firm’s new board member, cementing his grip on power.

Senior Lee is largely credited with turning the once-obscure firm into a global giant, but less is known about his son who has kept a relatively low profile while rising the ranks.

“J.Y. Lee has a lot to prove as all eyes are on him, and the recall crisis would be a crucial test for him,” said Wi Pyoung Ryang, analyst at the Economic Research Reform Institute in Seoul.

Industry experts have criticised the Lee dynasty for controlling the vast group through a complex web of cross shareholdings, although they only directly own about five percent of total stocks.

Samsung and other family-run conglomerates, or “chaebol,” have played a major role in South Korea’s stellar growth for past decades.

But the families have come under growing public criticism for controlling and running their businesses with minimum scrutiny by investors or regulators.

“It’s a tough and crucial time for Samsung, and its new leader has his work cut out,” Wi said.

As the recall threatens to drag on, it is unclear how long the crisis—and the risk of more explosions—would plague the firm, said Lee Seung-Woo, analyst at IBK Investment & Securities.

Since Samsung started rolling out replacements last week, half a million users in the US have exchanged handsets. About a half of 420,000 South Korean users reportedly have done so, but some are complaining of delayed delivery of new phones.

While the financial hit will likely be huge, a bigger worry for the firm is the effect on the Samsung name, said Linda Sui, analyst at market research firm Strategy Analytics.

“In addition to material loss by revenue and profitability, potential damage on brand image and consumer confidence is even worse and hard to fix up in the short term,” she said.

“The Korean giant is facing a tough time now,” she said, warning of “falling fortune and tough competition” until it rolls out another flagship model next year.