Jupiter moon may have water plumes that shoot up 125 miles 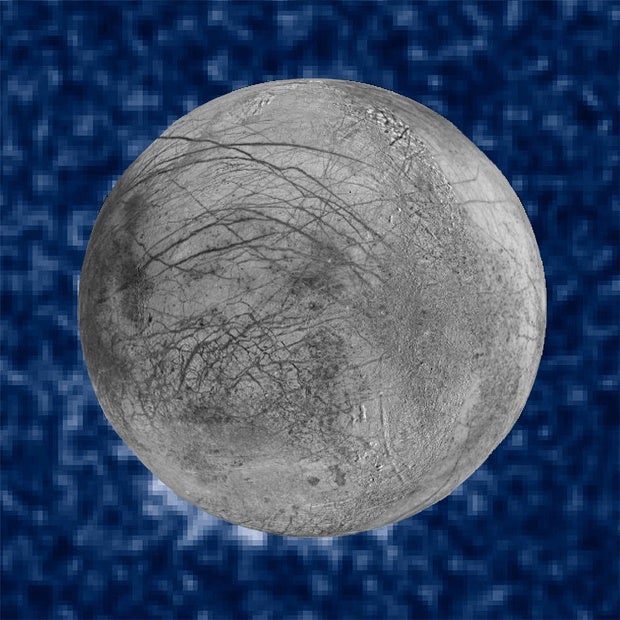 This Jan. 26, 2014 image provided by NASA shows a composite image of possible water plumes on the south pole of Jupiter’s moon Europa. Europa is among several moons in the solar system where evidence of an underground ocean has been discovered in recent years. The Hubble data were taken on January 26, 2014. The image of Europa, superimposed on the Hubble data, is assembled from data from the Galileo and Voyager missions. AP

LOS ANGELES— The Hubble Space Telescope has spied what appear to be water plumes on one of Jupiter’s icy moons shooting up as high as 125 miles.

The geysers are apparently from an underground ocean that is thought to exist on Europa, considered one of the top places to search for signs of life in our solar system.

The plumes at the south pole were detected by the workhorse telescope as the moon passed in front of Jupiter. Scientists believe the eruptions on Europa are sporadic since they were only able to spot them on three out of the 10 times that they looked over more than a year.

Even so, the possible presence of plumes, which shoot up and rain back down on the surface, would “allow us to search for signs of life in the ocean of Europa without needing to drill through miles of ice,” astronomer William Sparks of the Space Telescope Science Institute in Baltimore said Monday.

The latest finding builds on earlier work by Hubble, which in 2012 found hints of water vapor venting from Europa’s south pole. The telescope didn’t see anything in follow-up studies until this latest campaign, which was carried out by a different group of researchers.

If confirmed, Europa would be the second moon in the solar system where water plumes have been detected.

The Cassini spacecraft previously spied jets shooting out from the surface of the Saturn moon Enceladus (ehn-SEHL’-uh-duhs), which harbors an ocean beneath its icy shell. Unlike Europa, the geysers erupting from Enceladus are continuous.

The Juno spacecraft, currently in orbit around Jupiter, isn’t designed to study Europa and won’t be able to confirm the plumes, NASA said.

The space agency is in the early stages of drafting a mission to Europa in the 2020s that would involve putting a spacecraft in a long, looping orbit around Jupiter to make close flybys of the ice-encrusted world.

The European Space Agency is planning to fly its own spacecraft to the gas giant around the same time to study its three largest moons — Ganymede, Callisto and Europa. Jupiter has 67 moons.