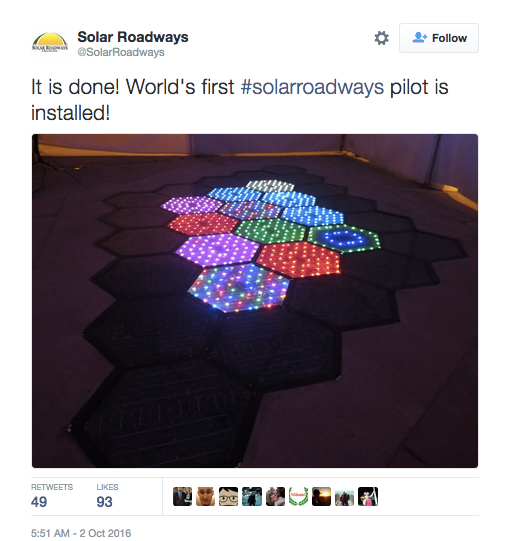 After a while in development, the Solar Roadways tiles are finally getting their first trial deployment.  Image @SolarRoadways/Twitter

In a tropical country like the Philippines, it makes sense to work on harvesting the abundant sunlight to accommodate our electricity needs. A US company called Solar Roadways thought of a way to harvest solar energy without the need for large, space-consuming solar farms, and it’s already doing public trials.

Solar Roadways has been developing hexagon-shaped road tiles that also double as solar panels for some time now. Apart from generating solar power, the road tiles come with built-in LEDs that can be programmed to form different signs or just light up the roadways at night.

Engadget reports that the trial run in Sandpoint, Idaho, USA, will have the road tiles provide power to a fountain and restrooms in a public square.

The dry run will be using only 30 panels, and general roadway application may take a while to happen. However, if these 30 panels could power a town square, imagine the possible applications!

For an archipelago country that is sorely lacking in space for putting up proper housing for everybody, let alone a space-hogging solar farm, turning the roadways into solar panels could contribute greatly to the national energy needs. That is, if the roads aren’t always congested by cars, which would cut off the panels from their primary energy source. Alfred Bayle

Solar projects can’t save the forest for the trees?