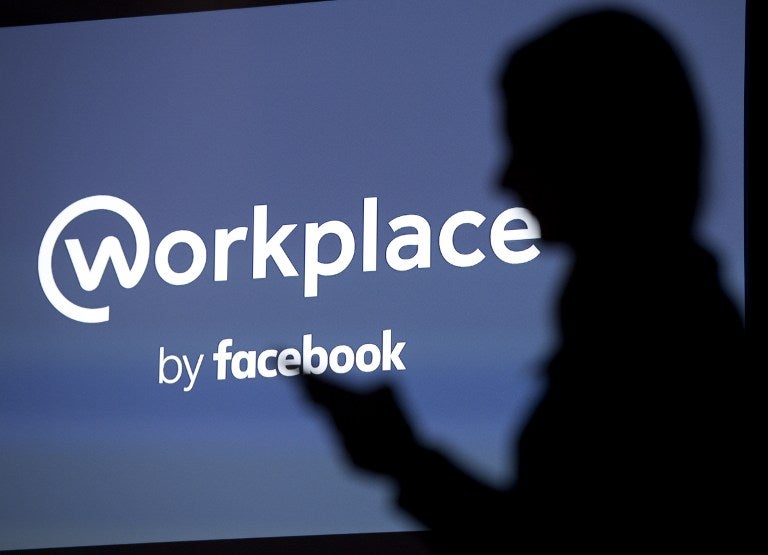 A logo for Facebook’s “Workplace” is seen in this posed photograph following the social media company’s launch event for the product “Workplace”, in central London on October 10, 2016. Social network giant Facebook launched the new global product hoping it would replace intranet, mailbox and other internal communication tools used by businesses worldwide. It is intended to compete with similar office communication products including Microsoft’s Yammer, Salesforce’s Chatter and Slack. AFP

The platform allows employees to collaborate in real-time and is intended to compete with similar office communication products including Microsoft’s Yammer, Salesforce’s Chatter and Slack.

The Silicon Valley company developed the concept, hitherto called “Facebook at Work”, two years ago in its London office and has since tested the product on 1,000 companies worldwide.

It is the first Facebook product launched outside the United States.

“We combined the things that already exist into a single tool that will allow employees to display a wall of information, like on their private profiles,” Julien Codorniou, director of Workplace, told AFP.

Workplace was developed outside of the Facebook ecosystem and remains completely separate from the social network — even using grey as the dominant color, rather than Facebook’s distinct blue.

“We combined the things that already exist into a single tool that will allow employees to display a wall of information, like on their private profiles,” Julien Codorniou, director of Workplace, told AFP.

The service will only enable the transfer of intra-office data, which will remain fully owned by the business.

“We’ve brought the best of Facebook to the workplace — whether it’s basic infrastructure such as News Feed, or the ability to create and share in Groups or via chat, or useful features such as Live, Reactions, Search and Trending posts,” said the company.

“This means you can chat with a colleague across the world in real time, host a virtual brainstorm in a Group, or follow along with your CEO’s presentation on Facebook Live.” 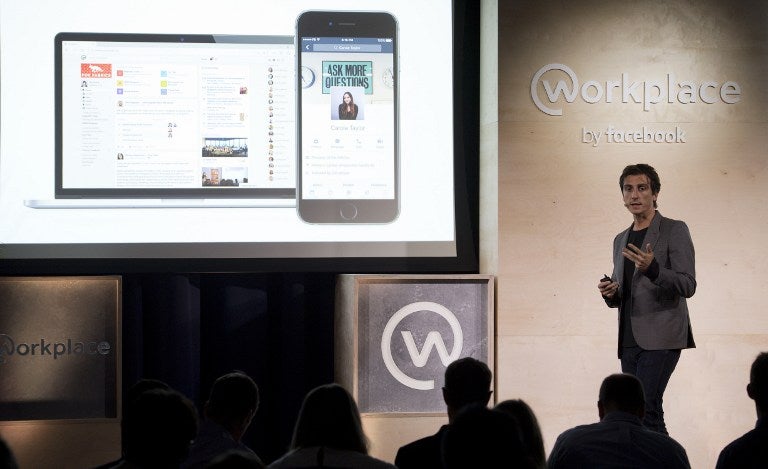 Julien Codorniou, Director of Facebook at Work, speaks during an event to launch the social media company’s latest product “Workplace”, in central London on October 10, 2016. AFP

Subscribers will pay between one to three euros ($1.10-$3.30) per connected employee, depending on the size of the business, while NGOs and educational establishments will receive the service for free.

“At the moment we have 1,000 companies that have already switched to Workplace before the worldwide launch, creating 100,000 groups,” said Codorniou.

Early adopters include multinationals Danone and Booking.com, financial institutions such as the Royal Bank of Scotland and NGOs including Oxfam and Save the Children, said Facebook.

Danone, which has seen 5,000 employees test the platform over 15 months, aims to move its workforce of 100,000 onto the service by the end of the first quarter next year, said company executive Francisco Camacho.

For Camacho, the key benefit is the mobile-first approach. “People are more mobile now, so when they have the platform in their hands, they are being able to connect with each other faster, to share ideas faster and react faster,” he told AFP.

Craig Le Clair, an analyst at research company Forrester, said Facebook will need to shift cultural perceptions of the company in order for Workplace to be a success.

“Facebook has never been about getting work done but quite the opposite. How do I enrich my life through better connection to friends and relatives,” he said.

The top five countries using Workplace so far are Britain, France, India, Norway and the US.

“There is a potential worldwide market of 2.5 billion employees, who have no similar product to choose from,” said Codorniou.

“Our ambition is to connect the world, which has to happen through the world of business,” he added. CBB