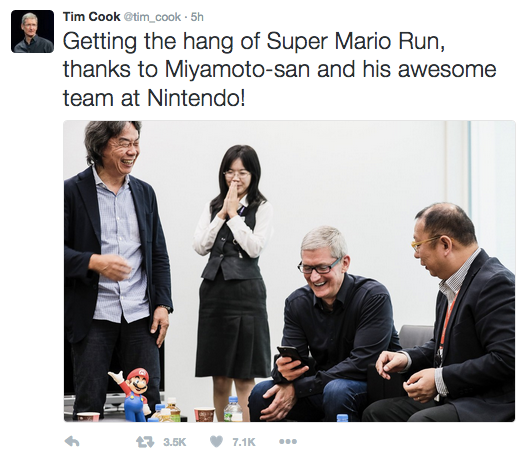 Tim Cook appears to be having a blast playing Super Mario Run with the executives of Nintendo.  Image Twitter/@tim_cook

During Apple’s last big event, everyone was surprised when “Mario” creator Shigeru Miyamoto made a surprise appearance on stage to show off the new Super Mario Run app. This time around, Apple CEO Tim Cook returned the favor by paying a visit to Nintendo’s headquarters in Kyoto.

Upon landing in Japan for a business trip, Cook immediately tweeted an “Ohayou gozaimasu” (good morning). He had made sure to meet with Nintendo executives, as well as Shigeru Miyamoto, while he was at the Land of the Rising Sun, 9to5Mac reported.

The Apple CEO also tweeted a photo, where Cook made sure to demonstrate what Miyamoto emphasized about Super Mario Run during the big reveal: that it could be played one-handed.

There is no solid date yet for the official release of Super Mario Run, Nintendo’s first official game app for the mobile platform. However, it will be a limited-time exclusive for iOS users. Android users will have to wait a while before they get to play with Nintendo’s iconic plumber on their devices. Alfred Bayle